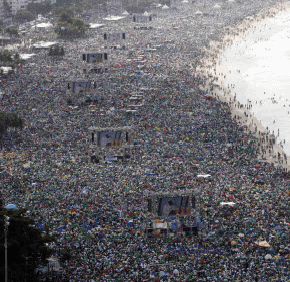 By Lise Alves
Catholic News Service
RIO DE JANEIRO – Logistics had been decided months earlier, with the smallest details thought out. Then came days of rain, and the World Youth Day vigil, originally set for a large open space in Guaratiba, was switched to Copacabana beach.
Authorities had placed more than 4,600 portable bathrooms in Guaratiba for pilgrims to use during the vigil; 270 were adapted for people with disabilities.
At Copacabana, just more than 400 were available. When the change in venue was announced July 25, city officials said that it would be impossible to transport all the bathrooms from Guaratiba, 30 miles outside Rio.
The problems began the night of July 26, when Alicia Souza of the Brazilian state of Minas Gerais said she missed much of the Stations of the Cross because she was in the bathroom line.
“I had no choice, and the line was very big, so I just missed it,” she said sadly.
By the vigil the night of July 27, some pilgrims had found a way to avoid the lines. Almost in front of the Copacabana Palace, one of Rio’s most famous hotels, someone had dug a hole in the sand and placed a sheet of plastic around it, so that pilgrims could use it.
Outside a cyber cafe pilgrims Gessica Alencar, 17, and Estela Laurano, 34, both from Brazil’s Parana state, waited patiently in line.
“They are charging 1 real (about 45 cents) for us to use their bathroom, but at least they are letting us in,” said Alencar.
Most in line were Brazilians.
“I don’t think foreigners know why we are standing here outside an Internet place,” said Luiza Silva of Brazil’s capital, Brasilia.
“I prefer to keep this place a secret, or else we will be forced to stay hours in line again,” she added with a laugh.
Those who did not have the patience to wait in the lines or pay to go to the bathroom had to count on the kindness of restaurant and hotel employees to sneak in and use their facilities.
Laurano said she was forced to buy a pizza in a pizzeria so she could use their bathrooms.
“The line for portable bathrooms is unreal,” she added.
For more World Youth Day stories, photos, blogs and videos, click here.
Copyright (c) 2013 Catholic News Service/U.S. Conference of Catholic Bishops
PrevNext