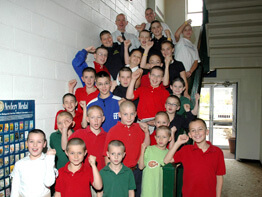 LIGONIER, Pa. – While sixth-grader Chad Scanlon has been battling a cancerous brain tumor he has kept his focus on other things, including collecting postcards from all 50 states and every country around the world.

The student at Holy Trinity School in Ligonier became intrigued with atlases and geography, so much so that he created his own atlas last summer. He and his family, parishioners of St. Boniface Parish in Chestnut Ridge, traveled to Belgium and several states before he became ill.

“I’m a big geography person and I like postcards because I can see the scenery,” said Chad, the son of James and Marie Paule Scanlon.

His U.S. collection includes several postcards of Washington that were sent to him from the office of President George W. Bush. He was working on getting postcards from Africa and Asia.

While he was receiving daily cancer treatments in Pittsburgh, Chad and his mother, who is the school’s French teacher, missed a lot of classes. The treatment also caused his hair to fall out. At the time, 20 of his classmates and two teachers either cut their hair or shaved their heads as a sign of support.

Chad said the haircuts made him feel “loved and appreciated.”

“It’s awesome,” he told The Catholic Accent, newspaper of the Diocese of Greensburg.

Barbara Sabo, the school principal, said the good deed went beyond the school community because one woman donated pizza to the students and another woman wanted her knitting group to make hats for the students.

Although Chad missed much of the fall semester of school, he is a straight-A student and started to attend school a little more each week, Sabo said. Since winter began, he has been attending school full time and jump-roping when he is not too tired. He hopes to compete with the school jump-rope team in the spring.

When he was missing classes, he had some help with school studies from his mother, his speech, physical and occupational therapists, and some of the Holy Trinity teachers.

“My sister also helps me a lot,” Chad said of 10-year-old Sasha, a fifth-grade student at Holy Trinity School.

He said receiving postcards from various locations helped him know that so many people were thinking of him and praying for him. And now, although his interest in geography continues, his career goal of becoming a geographer has changed.