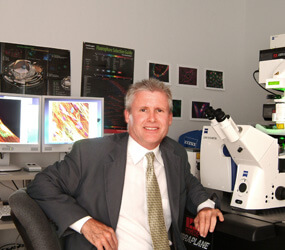 PORTLAND, Ore. – He rebuilds the blown-up and regenerates the maimed.

Someday, he hopes to restore the brain-damaged, all using designs from the Almighty – designs found in nature.

Dr. Kenton Gregory, a researcher at Catholic-run Providence St. Vincent Medical Center in Portland, has gained worldwide kudos for inventing a new bandage that quickly halts bleeding. On top of that, it seals wounds and kills bacteria. Compared to the cloth gauze that had been used from the days of Alexander the Great until the Gulf War, the bandage is a miracle.

Now, this Harvard-trained physician is getting grants from the U.S. Army to develop stem-cell therapies to heal wounded soldiers. He never uses embryonic stem cells, but only cells that come from the patient, snaring Mother Nature’s latent healing powers.

“The most important cell is your own,” said Gregory, 54. “It won’t get rejected or cause cancer.”

Hurt soldiers often write to Gregory and his colleagues, or even visit to give testimony about the new bandages. Many say they owe their lives to the Oregon lab.

“My top priority is taking care of injured U.S. soldiers with wounds that will haunt them for the rest of their lives,” Gregory told the Catholic Sentinel, newspaper of the Portland Archdiocese. “They are risking their lives for us. It’s something our country owes them.”

The bandage is a good example of the work done at the Oregon Medical Laser Center, which Gregory founded and which is located at Providence St. Vincent. The dressing’s material is based on a design almost as old as life itself, the shells of shrimps and insects.

The compounds in the resilient bandages have a positive electrical charge, while red blood cells have a negative charge. The two bond like magnets, stopping the flow. The bandages also grab the membranes of bacteria, blotting out infection.

With the military’s support, the bandage in 2002 received the second fastest approval in the history of the Food and Drug Administration. Members of Congress worked to expedite the process and had secured initial research funding.

Every U.S. soldier now carries the Oregon-made HemCon dressings, which they can apply to wounded buddies, or even to themselves. Bleeding is the single leading cause of death among soldiers killed in action. Researchers say the shrimp-based bandages will prevent 20 to 30 percent of battlefield deaths. The key is using proteins – like collagen – that are the base of connective tissues in organisms.

Taking more lessons from elegant natural design, Gregory and other researchers at the center are now focusing on ways to repair tissue damaged in arms and legs, mostly because of roadside bombs. Extreme swelling from hard-fragment blows brings pressure that cuts off the blood supply, which can lead to irreversible nerve and muscle damage.

The campaigns in Iraq and Afghanistan have been characterized by such injuries, as opposed to bullet wounds. An estimated 20,000 U.S. servicemen and women have suffered that sort of limb damage.

“They will have disabilities for the rest of their lives if we don’t find a way to help them,” said Gregory, who worked for the Department of Defense early in his career.

Adult stem cells derived from the patient’s own bone marrow or fat are the hope for replacing and regenerating damaged tissues. The work has shown promise in repairing muscle, nerve and blood-vessel cells and can be applied to people in the civilian population with burns or severe trauma.

Founded in 1991, the Oregon Medical Laser Center started by using lasers to repair serious wounds and halt strokes and heart attacks. When the Army caught wind of the work in the late 1990s and started giving grants, the discoveries increased.

Gregory’s “biggest thrill,” he said, is when ideas leap from the lab to the patient’s bedside.

With the military asking for technology to instantly plug bullet wounds without needing to apply pressure, the lab is working on a sort of spray to inject into the wound. Also on the horizon are methods to regenerate lungs damaged by pneumonia.

The Army may have the most interest in ways of restoring damaged brain tissue, another common injury caused by the bombs in Afghanistan and Iraq. Gregory described the method as “helping the brain heal itself.” The work may have implications for treating multiple sclerosis.