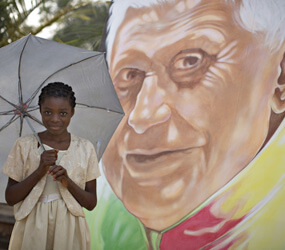 YAOUNDE, Cameroon – Pope Benedict XVI’s declaration that distribution of condoms only increases the problem of AIDS is the latest and one of the strongest statements in a simmering debate inside the church.

The pope was speaking to journalists aboard his flight to Cameroon March 17, and he was asked whether the church’s approach to AIDS prevention – which focuses primarily on sexual responsibility and rejects condom campaigns – was unrealistic and ineffective.

The pope framed his answer in terms of the church’s service to those with AIDS and its efforts to promote what he called a “humanization of sexuality” that includes the elements of fidelity and self-sacrifice.

The pope did not get into the specific question of whether in certain circumstances condom use was morally licit or illicit in AIDS prevention, an issue that is still under study by Vatican theologians.

Lest it be taken out of context, here is the exchange that took place on the pope’s plane. The question’s premise was “The Catholic Church’s position on the way to fight against AIDS is often considered unrealistic and ineffective,” and the pope responded:

“I would say the opposite. I think that the reality that is most effective, the most present and the strongest in the fight against AIDS, is precisely that of the Catholic Church, with its programs and its diversity. I think of the Sant’Egidio Community, which does so much visibly and invisibly in the fight against AIDS … and of all the sisters at the service of the sick.

“I would say that one cannot overcome this problem of AIDS only with money – which is important, but if there is no soul, no people who know how to use it, (money) doesn’t help.

“One cannot overcome the problem with the distribution of condoms. On the contrary, they increase the problem.

“The solution can only be a double one: first, a humanization of sexuality, that is, a spiritual human renewal that brings with it a new way of behaving with one another; second, a true friendship even and especially with those who suffer, and a willingness to make personal sacrifices and to be with the suffering. And these are factors that help and that result in real and visible progress.

“Therefore I would say this is our double strength – to renew the human being from the inside, to give him spiritual human strength for proper behavior regarding one’s own body and toward the other person, and the capacity to suffer with the suffering. … I think this is the proper response and the church is doing this, and so it offers a great and important contribution. I thank all those who are doing this.”

It should be noted that the pope, who spoke in Italian, was not blindsided by the question. Under the current practice on papal flights, reporters submit questions to the Vatican several days in advance, then a selection is made, presumably giving the pope time to prepare his responses.

The following day, the Vatican spokesman, Jesuit Father Federico Lombardi, returned to the subject of condoms and AIDS in a briefing for reporters in Cameroon. He said the pope’s comments on the plane were in line with the church’s basic position on AIDS, which has never had “excessive or absolute trust in condom distribution” as a way to stop the spread of the disease.

The church’s approach is based largely on education toward sexual responsibility, the spokesman said, and overemphasis on condoms “does not allow for an adequate concentration of attention on this formation and sense of responsibility.”

The pope’s words reflected a statement he made to South African bishops in 2005, when he noted that the church is in the forefront in the treatment of AIDS and said the “only fail-safe way” to prevent its spread is found in the church’s traditional teaching on sexual responsibility.

In saying that condom-promotion programs only increase the problem, the pope appeared to agree with those who have put forward several arguments: that condoms have a failure rate and so are never completely safe; that encouragement of condom use may promote promiscuity, a factor in the spread of HIV, the virus that causes AIDS; and that reliance on condom campaigns has overshadowed more effective means of prevention, namely fidelity and chastity.

There is another factor in the pope’s thinking, according to an Italian theologian, Franciscan Father Maurizio Faggioni, who has advised the Vatican on sexual morality issues. The pope sees condom campaigns as a question of cultural violence, especially in Africa, where there has never been a “contraceptive mentality,” Father Faggioni said.

The question of whether condom use in some circumstances may be morally acceptable is a separate and more difficult question, Father Faggioni told Catholic News Service.

Some bishops and cardinals have argued, for example, that a married couple in which one spouse has AIDS may reasonably be expected to use condoms to prevent transmission of the deadly disease. Others have said the church’s teaching against contraception regards married couples and that, because sexual relations outside marriage are already considered immoral, discussion of condom use outside marriage is irrelevant.

In 2006, Cardinal Javier Lozano Barragan, head of the Pontifical Council for Health Care Ministry, announced that his council had handed in a 200-page study on condoms in AIDS prevention, for further development by the Vatican’s doctrinal congregation.

The pontifical council’s study, the cardinal said at that time, included “an enormous rainbow” of theological and moral positions, from theologians who expressed “very rigorous” opinions against condom use even when used as a disease-preventing measure to those who held a “very understanding” perspective.

The hope was that, after additional study, the doctrinal congregation or even Pope Benedict might make a pronouncement on the complex questions.

But sources told CNS in mid-March that the doctrinal congregation’s action on the report has been quietly put on hold, at least for the moment.

“You could say officially that it remains under study,” one source said.

Another source said that after looking more closely at the question, the church experts decided it was premature for the Vatican to make a comprehensive statement on the theological and pastoral aspects of condom use, in part because there was not unanimity of opinion, and in part because many believed that discussion of the theological nuances would only invite confusion in the media and among Catholics.