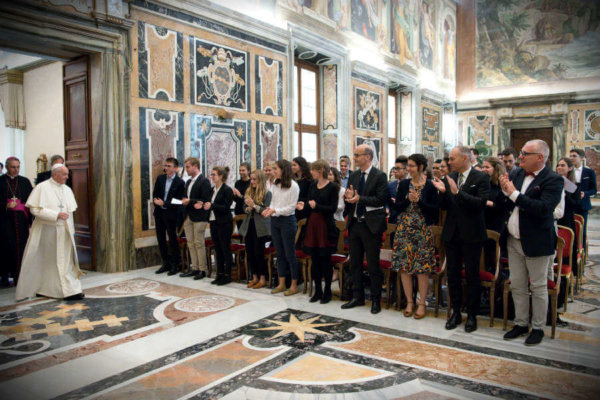 Pope Francis arrives for an audience with a group of students from a private Catholic school, "Institution des Chartreux," in Lyon, France, at the Vatican Oct. 19. (CNS photo/L'Osservatore Romano)

VATICAN CITY — Do not fall for the allure of money, which can enslave and alienate like a cult, Pope Francis told business school students.

“And it is also important that you be able to learn today the strength and courage to not blindly obey the invisible hand of the market,” he said.

The pope spoke Oct. 19 at the Vatican to a group of students from a private Catholic school, “Institution des Chartreux,” in Lyon, France. They are preparing for higher education in business and finance.

The pope said he was pleased they were receiving an education that touched on the “human, philosophical and spiritual” dimensions of life and said these aspects would be essential for their future professional life.

“Learn to remain free from the allure of money, from the slavery” that befalls those who “turn it into a cult,” he said.

He called on them to promote and defend more fairness and to manage the world’s resources adequately and justly.

“You are able to decide your future,” he said, urging them to feel and become more responsible for the world and human life.

“Never forget that every injustice against a poor person is an open wound and diminishes your very dignity,” he said.

“Even if this world expects that you strive for success, give yourselves the means and the time to follow paths of fraternity, to build bridges between people rather than walls” and to take part in the building of a more just and human world, he said.