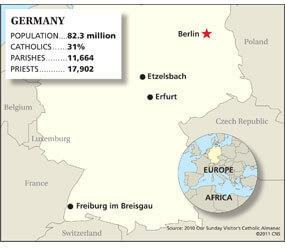 VATICAN CITY – Pope Benedict XVI will address the German parliament, meet with Jewish and Muslim groups, hold a prayer vigil with youths and celebrate Mass in Berlin’s Olympic Stadium during his Sept. 22-25 visit to his homeland.

It’s a heavy schedule for the 84-year-old pope, who will preside over 28 events and deliver 17 talks during the visit. The Vatican released a detailed program for the trip July 20.

It will be Pope Benedict’s third trip to Germany since his election in 2005, but his first visit to Berlin, the German capital. After landing in Berlin Sept. 22, the pope will meet with government leaders, give a major speech to the federal parliament, meet with Jewish representatives and then celebrate an evening Mass in the Olympic Stadium – the facility Adolf Hitler had built for the controversial 1936 Summer Games.