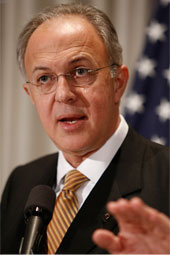 WASHINGTON – Pope Benedict XVI will find a spiritual nation when he visits the United States in April, according to a new national survey commissioned by the Knights of Columbus.

The survey, conducted by the Marist College Institute for Public Opinion in Poughkeepsie, N.Y., found that “Americans are interested in hearing how God, religion and spirituality may be incorporated into their daily lives.”

The results were released by Supreme Knight Carl Anderson March 25 at the National Press Club in Washington. His new book, “A Civilization of Love: What Every Catholic Can Do to Transform the World,” published by HarperOne, debuted the same day.

By a ratio of more than 4-to-1, the survey said, Americans have a favorable opinion of Pope Benedict; 58 percent of those surveyed said they view him favorably, compared with 13 percent who have an unfavorable opinion. Seventeen percent said they have never heard of him.

Sixty-five percent of Americans have a favorable opinion of the Catholic Church, compared to 28 percent who have an unfavorable view.

“The bottom line is despite very negative stories about the church and the pope” over the last few years, Mr. Anderson said, “the American people have a very … balanced view of (Pope) Benedict and the Catholic Church, and they are very open to hear his views on how they might live out their faith.”

Despite their positive view of the pope, Americans said they don’t know much about him, he noted.

When Pope Benedict comes to the U.S., Anderson said, Americans will find that he “is a very warm and kind man whose intellectual talents and formidable background as a theologian do not prevent him from giving sermons that are accessible to the average person.”

“He is an incisive creative thinker who is one of the most skilled and thoughtful theologians of modern times,” he continued. “He is deeply concerned about the future of the world and has a carefully thought-out worldview on how the church relates to the world and how the church can set out to change the world.”

Other results from the survey showed that:

– Seventy percent or more of Americans said they want to hear the pope talk about spiritual matters such as allowing God to be part of their daily lives and finding spiritual fulfillment “by sharing their time and talent,” as well as how “they can make a positive difference in the world, their state and communities.”

– Nearly two-thirds of Americans, or 64 percent, expressed an interest in hearing Pope Benedict address “how they can have a society where spiritual values play an important role.”

– A majority of Americans attend religious services regularly, including 59 percent of Catholics.

Anderson told his press club audience that the Knights have set up a special Web site – www. papaltrip.com. It features a daily schedule of papal events, an interactive map, a detailed biography of Pope Benedict, the full text of his encyclicals and links to his books.

The Knights also will sponsor a nationally broadcast TV discussion program titled “A Journey of Hope” to preview the trip. It will air April 13 on CBS affiliates in New York, Washington, Chicago and Los Angeles. It also will air on the Fox Business Channel on cable and on a variety of Catholic television outlets, including the Eternal Word Television Network. (Viewers should check local listings for airtimes.)

Anderson told his audience that it is “no accident” that Pope Benedict’s first encyclical was on love: “Deus Caritas Est” (“God Is Love”).

“The notion that God is love is fundamental to our understanding of our creator,” Mr. Anderson said. “We are all fallible human beings and we all need love and the very fact we exist at all is the result of God’s love. It is often hard for us to love others, but love we must if we have any hope to change the culture.”