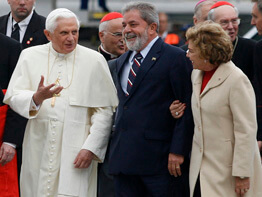 UPDATED
SAO PAULO, Brazil – Arriving in Brazil on his first papal trip to Latin America, Pope Benedict XVI said he wanted to help reinforce Christian values and counter new threats to the poor, the abandoned and the unborn.

“I am well aware that the soul of this people, as of all Latin America, safeguards values that are radically Christian, which will never be eradicated,” the pope said May 9.

The pope addressed several hundred civil and church dignitaries at an airport welcoming ceremony outside Sao Paulo, where his plane touched down after a 12-hour flight from Rome.

In their brief remarks at the airport, the pontiff and the Brazilian president highlighted the importance of family, the challenges facing young people, and the Catholic Church’s contribution to social programs in Latin America’s most Catholic and most populous country.

Da Silva told the pope that the country needs spiritual and moral leadership “to face the challenges of this new millennium.”

Saying that “the presence of the Catholic Church has been fundamental in Brazil, contributing to the country’s spiritual, moral and social life,” the president mentioned the church’s collaboration in social efforts, especially the government’s program to fight hunger.

Noting that his administration has “paid special attention to our youth, especially those who are poorest and most in need,” da Silva said it was important to ensure the country’s young people “a future that is dignified in every material and spiritual dimension.”

The pope said he had come with an essentially religious message that reflected the goals of the Fifth General Conference of the Bishops of Latin America and the Caribbean, which he was to open May 13.

The pope said he expected the conference to strengthen the subcontinent’s Christian identity “through the promotion of respect for life from the moment of conception until natural death as an integral requirement of human nature.”

“It will also make the promotion of the human person the axis of solidarity, especially for the poor and abandoned,” he said.

The pope emphasized that the majority Catholic populations of Latin America must make a particular contribution for the common good if the region is to solve its problems and build a future of peace and hope.

That means strengthening the family as “the basic cell of society” and promoting the values present in every level of society, especially among the indigenous peoples, he said.

The pope’s reference to the unborn was significant in Brazil, where there has been increasingly political pressure to make abortion legal. Officials say clandestine abortions are practiced widely in the country.

On the plane carrying the pope, his entourage and about 70 journalists, the pope spoke warmly about Brazil and said he was happy to return to Latin America, where he had visited several times as a cardinal.

Answering reporters’ questions, he said that while he was aware of the immense social and economic problems in the region, he also was acquainted with the rich qualities of the people.

After greeting the Brazilian cardinals, Pope Benedict boarded a helicopter for the short flight to the Campo de Marte Airport where he received a key to the city before boarding the popemobile for the trip to St. Benedict Monastery, where he was to spend the night.

Spending two and a half days in Sao Paulo, the pope was to meet with the Brazilian president in Bandeirantes Palace as well as with representatives of other Christian churches and other religions in St. Benedict Monastery.

He was to meet with young people in Paulo Machado de Carvalho stadium before canonizing a Brazilian Franciscan, Blessed Antonio Galvao, during his May 9-13 visit.

Then he moves to the Basilica of the National Shrine of Our Lady Aparecida, where he will inaugurate the bishops’ conference, celebrating Mass and delivering a major speech to participants of the May 13-31 meeting.

The trip turns a spotlight on Latin America, a geographical area that has had little attention from this pope to date, but where 43 percent of the world’s Catholics live.

It also broadens the horizons of the pope’s two-year pontificate, taking him outside Europe, where four of his previous five trips have occurred.

– – –
Contributing to this story was Barbara J. Fraser in Sao Paulo.