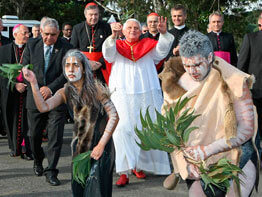 SYDNEY, Australia – Wonder and awe, tradition and novelty were combined July 17 as Pope Benedict XVI shared a 45-minute boat ride through Sydney Harbor, chatting with a handful of young people before formally addressing thousands of them.

As the pope’s boat left Rose Bay, he briefly sat in the wooden throne placed on the bow. But soon the young people introduced to him crowded around and he stood with them at the railing, chatting and waving to people on shore and on boats escorting them to the welcoming ceremony.

At Rose Bay, Aboriginal elders greeted the pope, gave him gifts and, dancing, led him to the water’s edge.

Once the pope’s boat reached the old dockyard at Barangaroo, a young Aborigine greeted the pope with a hug, and the pope stood with a broad smile on his face as young indigenous danced for him.

The Book of the Gospels was carried forward on a wooden boat and was adorned with a lei as the deacon received it.

In his address to the estimated 150,000 young people at Barangaroo, the pope said respect for creation means protecting and perfecting the person just as much as it means safeguarding the world’s natural resources.

The pope told the youths that while the thought of his July 12-13 flight to Australia “was somewhat daunting,” it allowed him to fly over seas and oceans, deserts and forests.

Barely perceptible from the sky, he said, were the millions of people created in God’s image and likeness.

“At the heart of the marvel of creation are you and I, the human family, ‘crowned with glory and honor’” as the Psalms say, he told them.

With all the natural beauty of the planet, he said, “perhaps reluctantly we come to acknowledge that there are also scars which mark the surface of our earth, erosion, deforestation, the squandering of the world’s mineral and ocean resources in order to fuel an insatiable consumption.”

And, he said, the same is true of people, who have achieved so much in so many ways, yet in other ways are destroying themselves or others.

“Some of you excel in studies, sport, music or dance and drama, others of you have a keen sense of social justice and ethics, and many of you take up service and voluntary work,” he said.

Everyone has moments when they see the innate goodness of people and are filled with awe and gratitude, he said. But society, which is the world people make for themselves, also has “scars, wounds indicating that something is amiss.”

“The poison that threatens to erode what is good” can be seen in alcohol and drug abuse, violence and the degradation of human sexuality, the pope said.

“There is also something sinister which stems from the fact that freedom and tolerance are so often separated from truth,” he said. “This is fueled by the notion – widely held today – that there are no absolute truths to guide our lives.”

“Dear friends,” Pope Benedict told the young people, “life is not governed by chance; it is not random.

“Your very existence has been willed by God, blessed and given a purpose. Life is not just a succession of events or experiences, helpful though many of them are,” he said.

Life, he told them, “is a search for the true, the good and the beautiful.”

God gave people the freedom to make choices so that they would choose truth, goodness and beauty, the pope said. God sent his son into the world to show people the way and he sent the Holy Spirit to give them the strength to make the right choices.

“Experience shows that turning our back on the Creator’s plan provokes a disorder which has inevitable repercussions on the rest of the created order,” he said.

“God’s creation is one and it is good,” the pope said.

He said safeguarding the environment is important, but the center of God’s creation is the human being, whose life and dignity must be safeguarded first of all. The needs of the poor, the elderly, immigrants, women and children who are abused all cry out for a renewed commitment to protecting the life God has created, Pope Benedict said.

“How can it be that the most wondrous and sacred human space – the womb – has become a place of unutterable violence” through abortion? he asked.

“Our hearts and minds are yearning for a vision of life where love endures, where gifts are shared, where unity is built, where freedom finds meaning in truth and where unity is found in respectful communion,” the pope told the young people.

“This is the work of the Holy Spirit,” he said. “This is the hope held out by the Gospel of Jesus Christ.”

Pope Benedict told the young people they were baptized to bear witness to that reality and confirmed so they would have the strength to proclaim it to the world.