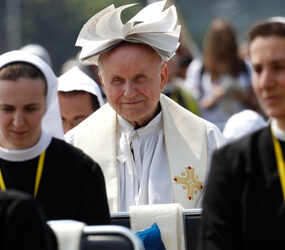 ZAGREB, Croatia – Pope Benedict XVI used his apostolic journey to the Croatian capital to encourage nations to build their communities on Christian values and to support the traditional family and the sanctity of life.

A culture guided by truth, reason and love not only will lead to peace, justice and solidarity, the community’s very survival is dependent on such transcendent values, he said during his brief two-day pilgrimage June 4-5.

If religion, ethics and a moral conscience are banished from informing the public realm, “then the crisis of the West has no remedy and Europe is destined to collapse in on itself” and risk falling prey to every form of tyranny, he said in an audience with Croatia’s political, religious, cultural, business and academic representatives.

Free and just democracies thrive when citizens’ consciences have been formed by love and Christianity’s “logic of gift” in which the good of the whole human family is sought after, not narrow self-interests, the pope said June 4 in Zagreb’s ornate Croatian National Theater.

“The quality of social and civil life and the quality of democracy depend in large measure” on all citizens possessing and exercising a conscience that listens, not to subjective feelings, but to an objective truth that recognizes one’s duty to God and all human beings, he said.

Such moral consciences are formed in Christian families, parishes and Catholic schools, the pope said.

“This logic of gratuitousness, learned in infancy and adolescence, is then lived out in every area of life, in games, in sport, in interpersonal relations, in art, in voluntary service to the poor and suffering,” as well as in policy making and the economy, he said.

The 84-year-old pope headed to the Croatian capital in an effort to encourage this predominantly Catholic country to resist secular temptations and hold strong to its Christian identity as it prepares for full integration into the European Union. It was Pope Benedict’s 19th trip outside Italy and 13th to a European nation.

Even though nearly 90 percent of the country’s population declare themselves Catholic, the bishops say the country is experiencing fierce pressure to allow adoptions by same-sex couples, ease restrictions on artificial reproduction and legalize euthanasia. Divorce and abortion are legal and same-sex civil partnerships are recognized in Croatia.

Before hundreds of thousands of families and young people gathered for Mass in Zagrab’s grassy hippodrome June 5, Bishop Valter Zupan of Krk, Croatia, decried current threats against the family saying alternative lifestyles “have no basis in European culture” and every child has the right to have both a mother and a father.
The bishop, president of the Croatian bishops’ commission for the family, urged the government to defend life by reconsidering its abortion laws and to stop calling something “that leads to death, progress.”

The emphasis on the family came as part of the country’s first national gathering of Croatian families. Some 400,000 people attended, including families, bishops, priests and religious from nearby nations including Slovenia, Serbia, Albania and Macedonia.

Jubilant crowds squelched through the muddy fields to chase after the popemobile as it slowly circled the giant horse track. People waved banners and Vatican and Croatian flags and many babies braved being passed over barricades and through the open popemobile window to receive a kiss and blessing from the pope.
In his homily, Pope Benedict called on the government to support families and he urged young men and women to be courageous and fend off trends that advocate “living together as a preparation, or even a substitute for marriage.”

“The presence of exemplary Christian families is more necessary and urgent than ever” in a world that promotes false freedoms, materialism, superficial relationships and an empty, sentimental notion of love that seeks “the gratification of instinctive impulses without a commitment to build lasting bonds,” he said.
“Do not be afraid to make a commitment to another person,” he said as he encouraged married couples to be open to life since the “respect for natural moral law frees people, rather than demeaning them.”

In an evening vespers service in the neo-Gothic Zagreb Cathedral June 5, the pope urged bishops to be vigilant and guide the faithful to ensure the church’s moral teaching was correctly understood in light of the Gospel.

Pope Benedict urged church leaders “to strive for reconciliation among separated Christians and between Christians and Muslims” in reference to lingering religious and ethnic tensions between Croats, Serbian Orthodox and Muslims that once plagued the Balkan region.

After vespers, the pope prayed at the tomb of Blessed Cardinal Alojzije Stepinac – a national hero for Croats and a highly controversial figure for Serbian Orthodox and some Jewish groups who have accused him of being a Nazi sympathizer.
Pope Benedict praised the martyr of the church saying the revered cleric became “a living image of Christ” and was able to withstand the suffering and torment brought about by his opposition to Nazi then communist oppression. He defended Jews, Orthodox and gypsies who were targeted by the murderous World War II-era Ustase regime, the pope said.

He said the cardinal is a role model for all people, not just Croatians, because he courageously defended “the truth and man’s right to live with God.”
A torrential downpour and lightning storm lifted right before the pope was due to lead some 50,000 young people in a prayer vigil in the city’s Ban Josip Jelacic Square June 4.

Spirits were not dampened, however, as the crowds sang and chanted the pope’s name.

The pope told them to resist today’s materialism and superficiality and let Jesus become their “friend and companion along life’s journey.”

True happiness and the meaning of life are found living fully immersed in God’s love which naturally radiates out toward others seeking the good and well-being of others, he said.

Becoming rooted in Christ will take sacrifice and commitment, especially in the face of so many temptations, but it is worth the effort, he said, “you will fully become the person you are meant to be.”

The festivities and Liturgy of the Word were followed by a long period of silent adoration of the Blessed Sacrament.

Jesuit Father Federico Lombardi, Vatican spokesman, told journalists the next day that the pope was “very impressed” with the intensity of prayer and veneration at the end of the event.

“It was so quiet, I could hear the birds chirping,” the priest said.

He said when the pope drove past the crowds, “he looked in admiration” at all the people still kneeling on the ground and concentrated in prayer.

The pope’s trip also coincided with Croatia’s 20th anniversary of its independence from Yugoslavia and the eve of its full accession into the European Union.
Croatia’s political and social evolution can be seen in the capital’s architecture as modern steel and glass high-rises have sprung up among rundown concrete communist-era apartment blocks; both are juxtaposed against the city center’s Austro-Hungarian styles, reflecting the influence that empire had over Croatia for centuries.

Pope Benedict has long supported Croatia’s entry into the economic and political bloc of 27 member states.

In response to questions from journalists aboard the papal plane, Pope Benedict said Croatian cardinals and bishops have always told him that they feel Croatia is not a Balkan nation, but a part of “middle Europe,” he said. Therefore, “it’s logical, right and necessary that it enters into the union.”

When asked what he thought of Croatian opinion polls showing a sharp decline in support of entering the union, the pope said a bit of skepticism is understandable.
“Perhaps there is a fear of an overly powerful centralist bureaucracy, a rationalistic culture that does not sufficiently take into account the richness of historical diversity,” he said.

The pope said at a colorful welcoming ceremony at the airport that Croatia has a mission to help the other EU nations “inject new life in to that priceless common heritage of human and Christian values.”

Croatian President Ivo Josipovic told the pope in his welcoming address that even though he is agnostic, he believes in and builds his policies on the Christian values of justice, forgiveness and reconciliation.

The president told the pope that no matter what one’s religious affiliation, it is love and reason together that create an ethical and healthy family life, community and nation.

From love and reason spring forgiveness and healing, which “are the groundwork of modern Europe” and an antidote to the narrow-mindedness that fueled so many wars in Europe, he said.

A torrential downpour and thunderstorm led organizers to cancel the formal farewell ceremony at the airport. Instead the pope, local bishops and government dignitaries met briefly in a large hangar to shake hands and share parting words.