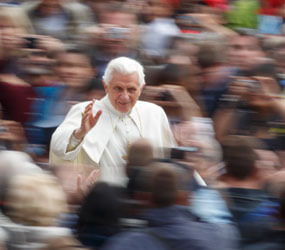 VATICAN CITY – Pope Benedict XVI called St. Therese of Lisieux’s autobiography, “The Story of a Soul,” a wonderful authentic “treasure” and invited everyone to read it.

The 19th-century Carmelite saint’s teaching of “the ‘little way” of holiness has been so influential in our time,” he said April 6 at his weekly general audience.

His catechesis was a continuation of a series of talks dedicated to the “doctors of the church,” men and women who made important contributions to Catholic theological understanding.

St. Therese, who was born in 1873 in France, died at the age of 24 of hemoptysis, or bleeding of the lungs.

Her spirituality “centered on the contemplation of God’s love revealed in the mysteries of the incarnation and redemption,” the pope said.

The saint “sought to be little in all things and to seek the salvation of the world,” he said.

Her autobiography was published a year after her death and was enormously successful in many parts of the world, he said.

“I would like to invite all of you to rediscover this great little treasure, this glowing commentary on the Gospel fully lived,” the pope said.

The book is “a wonderful story of love, told with such authenticity, simplicity and freshness that the reader will be nothing but captivated,” he said.

“Therese shows all of us that Christian life is fully living the grace of baptism,” by fully giving oneself over to God and by living like Christ, he said.

The pope said “her example and prayers help us to follow ‘the little way of trust and love’ in spiritual childhood, abandoning ourselves completely to the love of God and the good of souls.”

A childlike faith in God entails giving oneself fully to him and putting one’s life completely in his hands, the pope said. Such faith is “inseparable from true love,” which is a total giving of self, he said.

The pope said the faithful need to tell God every day that “we want to live out our love for him and others.”

St. Therese’s life and teachings are “a guide for everyone” especially for theologians, he said, because she approached the sacred Scriptures with “humility and charity, faith and hope.”