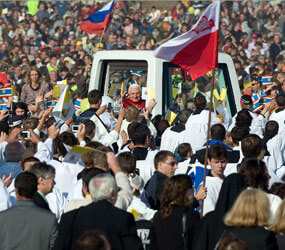 PRAGUE, Czech Republic – Commemorating the 20th anniversary of the peaceful revolt that brought down the country’s communist regime, Pope Benedict XVI urged people in the Czech Republic to rediscover the spiritual and moral values that sustained their struggle for freedom.

In gatherings Sept. 26-28 with political, social, cultural and religious leaders as well as the Catholic faithful, the pope delivered a message of hope meant to inspire both the country’s majority of nonbelievers and the minority Catholic community.

Central to his message was that no society, no matter how democratic, could ever maintain a healthy and ethical sense of freedom without guidance from the truth found in God and the wisdom of faith.

The pope’s trip to Prague, Brno, and Stara Boleslav was his 13th trip abroad and his seventh to Europe. The fact that more than half of his apostolic journeys so far have been to Europe reflects his deep concern for revitalizing the continent’s Christian heritage.

“True freedom presupposes the search for truth – for the true good – and hence finds its fulfillment precisely in knowing and doing what is right and just,” the pope said during a meeting Sept. 26 with diplomats and political, civil, religious and cultural leaders in Prague’s presidential palace.

Under the soaring gilded stucco ceilings of the palace, the pope reminded his audience that the country’s hard-fought freedom must be properly used. Leaders in society have the duty to encourage citizens to seek the truth and goodness, he said.

“Jointly we must engage in the struggle for freedom and the search for truth, which either go together, hand in hand, or together they perish in misery,” the pope said.

He urged people “to apply their faith respectfully yet decisively in the public arena” so that the truth and wisdom of faith could light the path of human progress.

“Far from threatening the tolerance of differences or cultural plurality, the pursuit of truth makes consensus possible, keeps public debate logical, honest and accountable” and ensures a society that is united and dedicated to the common good, he said.

The Czech Republic represents a unique challenge for the church. Some 60 percent of the population claims to profess no religious belief – making it the most secular country in Europe.

The largest faith community on the landscape is the Catholic Church, but Catholics are still only 30 percent of all inhabitants, and only a small percent say they are active members of the church.

The pope told journalists aboard the papal flight to Prague “that normally those who determine the future are the creative minority,” and he said this applies to European countries like the Czech Republic.

“The Catholic Church must see itself as a creative minority that has a heritage of values that are not passe but are alive and relevant,” he said.

At a welcoming ceremony at Prague’s airport, the pope said the impact of 40 years of an atheist totalitarian regime could not be underestimated. The flame of faith has been kept alive thanks to the many “courageous martyrs whose fidelity to Christ spoke far louder and more eloquently than the voice of their executioners,” he said.

At an outdoor Mass Sept. 28 to celebrate the feast of St. Wenceslas, the patron saint of the Czech Republic, the pope said bearing witness to the Gospel was not easy.

“It is not enough to appear good and honest: One must truly be so. And the good and honest person is the one who does not obscure God’s light with his own ego, does not put himself forward, but allows God to shine through,” the pope said in his homily.

Sometimes it seems there is little motivation to put Christ first when so many people who exclude God from their lives and show no respect for others end up reaching the highest pinnacles of power or achieve great success, he said.

But “one need only scratch the surface to realize how sad and unfulfilled these people are,” and history points to many powerful figures in history who all of a sudden were stripped of their power, he said.

Some 40,000 people assembled for the outdoor Mass in a large field in Stara Boleslav. The town, 15 miles northeast of Prague, represents the spiritual heart of Bohemia and the origin of Czech statehood. Every year on Sept. 28 patriotic sentiment and religious devotion merge as citizens take part in a pilgrimage to Stara Boleslav, where St. Wenceslas, a 10th-century prince credited with bringing Christianity to the Czech people, was murdered by his brother.

The Mass seemed like a mini-World Youth Day celebration as past youth day theme songs were sung and thousands of young people cheered and waved the flags of various countries. Many slept overnight in tents and some even came by water on rafts from a small town three miles away.

After the Mass, the pope told the young people that Christ “knocks on the door of your freedom and asks to be welcomed as a friend.” While young people are often led astray by “illusory visions” of happiness, he said, only Christ can satisfy the human desire for happiness and meaning in life.

Addressing students and scholars at Prague’s Hradcany Castle Sept. 27, the pope said education is not merely “the accumulation of knowledge or skills” and must include forming the human conscience so that the individual seeks to live a virtuous and ethical life.

The pope highlighted his concern for families and children during his visit Sept. 26 to the Church of Our Lady of Victory, where he venerated the Infant of Prague.

Kneeling before the 18-inch-high statue, which draws 2 million pilgrims a year, the pope gave a special blessing for all the children of the world and appealed for increased attention to children in difficulty. The holy infant recalls the beauty of childhood, he said.

“Yet how many children are neither loved, nor welcomed, nor respected. How many of them suffer violence and every kind of exploitation by the unscrupulous,” he said.

There was not much public sign of the pope’s presence in Prague, with few posters and very little fanfare along the routes taken by the papal motorcade. Much of the city had emptied out for the three-day holiday weekend, perhaps spurred by dire warnings of traffic snarls during the papal visit.

But the papal visit drew Catholics from all over the Czech nation and from neighboring Austria, Slovakia, Germany and Poland, specifically for the outdoor Mass Sept. 27 in the Moravian diocese of Brno, some 140 miles southeast of Prague. Local organizers said 120,000 people attended the event, making it the largest Mass every celebrated in the Czech Republic.

Gathered on a mowed hayfield at the airport, the jubilant crowd waved flags and cheered when the pope’s plane landed. Some pilgrims wore colorful traditional dress, while others sported backpacks and pedaled bicycles to get to the event.

The pope’s homily focused on hope and how “the only certain and reliable hope is founded on God.”

“History has demonstrated the absurdities to which man descends when he excludes God from the horizon of his choices and actions, and how hard it is to build a society inspired by the values of goodness, justice and fraternity” he said.

The country is free of oppression, but people still need to be freed “from the evils that afflict the spirit,” and saved from the poverty of isolation, despair, and egoism, he said.

During a vespers service Sept. 26 in Prague’s St. Vitus Cathedral, the pope encouraged the Catholic community to bear witness to the Gospel even though it was not easy to do so in a country still scarred by atheism and often seduced by hedonistic consumerism and cultural relativism.

Monsignor Tomas Roule, secretary to Prague’s archbishop, Cardinal Miloslav Vlk, told Catholic News Service that the younger generations are getting used to the idea of being open about their faith.

He said those who have not experienced communism’s hostility toward and persecution of religion are finding “it’s now coming to be normal to believe” in God. He said people see how easily and openly Christians in the United States express their beliefs and that proves to Czech Christians that faith is nothing out of the ordinary or to be ashamed of.