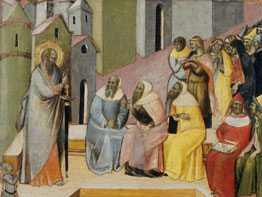 VATICAN CITY – Pope Benedict XVI is known to the world as the successor of St. Peter, the first pope. But for the next 12 months he’ll be turning the spotlight on St. Paul, the church’s archetypal missionary.

The jubilee year marks the 2,000th anniversary (more or less) of the apostle’s birth, and it fits nicely into what has become an important theme of Pope Benedict’s pontificate: the Christian duty to evangelize.

As the pope told the Roman Curia last December, the idea of all religions getting along harmoniously does not negate the task of leading others to Christ.

“Whoever has recognized a great truth, who has found a great joy, should transmit it. He cannot in fact keep it to himself. Gifts so large are never destined for just one person,” he said.

The pope has pointed to St. Paul as a model of evangelizing energy. Known as the “Apostle of the Gentiles,” he preached across a vast swath of Mediterranean lands and helped move the early church into the larger world.

Born in Tarsus, in what is today part of modern Turkey, St. Paul grew up in a Jewish family and became a tent-maker by trade. Said to be present at the stoning of St. Stephen, the first martyr, he became a zealous persecutor of Christians throughout the Roman lands of the eastern Mediterranean and Asia Minor.

On the way to arrest Christians in Syria, as recounted in Scripture, he was blinded temporarily by a vision of Jesus Christ. As he recovered in Damascus, he was “filled with the Spirit” and was baptized.

St. Paul eventually made a series of four major missionary journeys that stretched from Jerusalem to Rome, where he was finally put to death by Roman authorities.

Pope Benedict has held up the life of St. Paul as a lesson to modern Christians, a theme he is certain to expand upon during the jubilee year.

In particular, the pope has cited the apostle’s conversion as relevant to Christians of every age. Contemporary men and women, the pope has argued, are also open to that kind of life-changing experience, which is always based on the personal encounter with Jesus Christ.

The pope has pointed to St. Paul’s martyrdom as exemplary as well, saying that in every era Christianity is only effective and credible if Christians are willing to “pay personally for their faith in Christ.”

“He lived and worked for Christ; he suffered and died for him. How current is his example today,” the pope said of St. Paul.

A quick glance at papal texts reveals that St. Paul is by far the most quoted of Scripture writers in Pope Benedict’s sermons and talks. That trend is about to intensify as the entire church experiences a full-immersion course in his life and writings.

Unlike Pope John Paul II, who visited several sites where St. Paul lived and preached, Pope Benedict does not have current plans for a “Pauline pilgrimage.”

But he already walked in the footsteps of the apostle when he visited Turkey in 2006. At Ephesus, where St. Paul is said to have preached, the pope said Mass and recalled the principle that fueled the apostle’s missionary activity: that “all men and women, including the pagans, are called in Christ to share fully in the mystery of salvation.”

The pope shares another major conviction that St. Paul emphasized frequently when he preached in a new area: that Christians can be good citizens, and that the Gospel is not foreign to any culture or any population on earth.

Sts. Paul and Peter were two very different figures for the early church, and there were tensions between the two – something Pope Benedict has mentioned more than once.

But he also has recalled that, according to Rome tradition, the two saints met in Rome before they were martyred, hugging and blessing each other. As the pope put it, despite all their human differences, they showed the world “a new and authentic way of being brothers.”