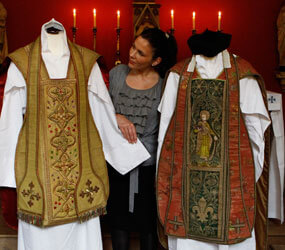 VATICAN CITY – Pope Benedict XVI’s decision to travel to Great Britain to personally beatify Cardinal John Henry Newman will give him an opportunity to highlight Cardinal Newman’s teaching about the relation between faith and reason, the role of conscience and the place of religion in society.

During his Sept. 16-19 trip, the pope will visit the Scottish cities of Edinburgh and Glasgow before traveling to London and Birmingham for the beatification. Cardinal Newman was a 19th-century theologian and intellectual who was a leader in the Anglican reform effort known as the Oxford Movement before becoming a Catholic.

The pope will celebrate open-air Masses, meet Queen Elizabeth II and Prime Minister David Cameron and make a major address to leaders of British society. His visit includes a meeting with leaders of other religions, an ecumenical prayer service and a visit to a home for the aged.

But the Vatican has billed the trip as a pastoral visit “on the occasion of the beatification of Cardinal John Henry Newman.”

Since his election more than five years ago, Pope Benedict has presided over several canonization ceremonies, but he always has delegated the task of presiding over beatifications to highlight the different importance of the two ceremonies.

The pope’s decision to make an exception for Cardinal Newman demonstrates his personal admiration for the British churchman, an admiration he once said went back to his first semester of seminary theology studies in 1946.

“For us at that time, Newman’s teaching on conscience became an important foundation” for theological reflection, the then-Cardinal Joseph Ratzinger said at a conference in 1990 marking the centenary of Cardinal Newman’s death.

World War II had just ended, he said, and the German seminarians who had grown up under Adolf Hitler witnessed the “appalling devastation of humanity” that resulted from a totalitarian ruler who “negated the conscience of the individual.”

While most of the world’s totalitarian regimes have fallen, Pope Benedict often has warned that the individual conscience – which must seek and try to act on truth – is being threatened today by a culture of moral relativism, which asserts that nothing is always right or always wrong and almost anything is permissible.

Pope Benedict also often speaks of the essential interplay of faith and reason, a point Cardinal Newman emphasized. While embracing faith and knowing there were no scientific proofs for God’s existence, the cardinal was convinced that believing in God was reasonable, an idea that frequently is challenged by modern British schools of philosophical atheism.

Cardinal Newman’s commitment to the search for truth, his concern for fidelity to doctrine and his conviction that faith must be lived publicly all are key concepts in the teachings of Pope Benedict as well.

In his celebrations with Catholics in Great Britain and his addresses to British leaders, the pope is expected to emphasize his conviction that religious belief is not a hindrance to social progress and peaceful coexistence.

Over the past year, news of the trip led to anti-visit petition drives and promises of protests, primarily over the use of taxpayer money to fund the visit of a religious leader, but also because of Catholic Church positions on moral issues such as contraception and homosexuality.

Groups representing victims of clerical sex abuse also have threatened to protest the papal visit, while officials at the Vatican and in England have said it is possible the pope would meet privately with some victims as he did in the United States, Australia and Malta.

The fact that Cardinal Newman’s Christian faith and theology initially was formed within the Church of England will require particular sensitivity at a difficult time in the Roman Catholic-Anglican search for full unity.

The Rev. David Richardson, director of the Anglican Center in Rome and the archbishop of Canterbury’s representative to the Vatican, said that while some people may see Cardinal Newman’s beatification as another point of contention, “it’s much more likely that the beatification will be bridge building.”

The liturgical calendar of the Church of England already commemorates Newman, whom many Anglicans honor as an eminent theologian, a person of prayer and a force of renewal for the church, he said.

“This beatification is not simply a piece of triumphalism for a dead Roman Catholic, but it’s actually an opportunity to embrace a wholeness – his Anglicanism as well as his Catholicism,” Rev. Richardson said.

At a time when many saw a danger of the Church of England being treated almost as a department of the English government, Newman was a leader in the Anglican Oxford Movement’s effort to return to the teachings of the early Christian theologians in order to recover a sense of the church as a sacred institution with a divine mandate.

As he continued his search for the truth, he was received into the Catholic Church in 1845, was ordained a Catholic priest in 1847 and was named a cardinal in 1879.

Monsignor Mark Langham, a priest of the Diocese of Westminster and an official of the Pontifical Council for Promoting Christian Unity, said, “You cannot begin to understand Newman the Catholic without Newman the Anglican.”

At the same time, while convinced that the fullness of truth was found in the Catholic Church, Cardinal Newman valued the formation he received as an Anglican and “was always very clear that his role was not one of trying to poach people for the Roman Catholic Church,” he said.