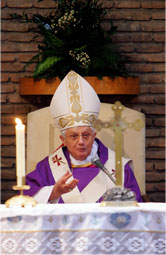 VATICAN CITY – The abundant life Jesus promised is not immortality on earth or heaps of nice things, but rather it is an eternal relationship with God, who is infinite love, Pope Benedict XVI said.

“Imagine that medicine was able to come up with a prescription for immortality,” the pope told young people gathered for Mass March 9 at the Church of St. Lawrence, just off St. Peter’s Square.

If such a pill existed, he said, biological life would go on and on; “we would find ourselves in an old world, a world full of the aged, a world that would not have space for the young, for the renewal of life.”

“This cannot be the type of immortality to which we aspire; this is not the possibility of drinking at the fountain of life that we all desire,” he said.

Pope Benedict celebrated Mass at St. Lawrence to mark the 25th anniversary of the church’s dedication as an international youth center.

The youth section of the Pontifical Council for the Laity coordinates activities at the church, international students studying in Rome gather for Mass there each Friday night, and a program to train young evangelists is operated by the French-founded Emmanuel Community.

After brief greetings to various officials gathered with the young people, Pope Benedict proceeded to give his homily without using a prepared text.

He said the Gospel story of Jesus raising his friend, Lazarus, from the dead leads to several questions: “What is life? What is death? How should one live? How should one die?”

The person is more than just a biological organism, the pope said. People have a spirit and intelligence that enables them to look beyond the material world and their own experiences, to know the world, to know the infinite and to seek the source of all being.

“Certainly,” the pope said, “man is always man with all his dignity even if he is in a coma (or) even at the stage of being an embryo, but if he lives only biologically all the potential of his being is not realized and developed.”

“Life in abundance is not, as some think, to consume everything, to have everything, to be able to do everything one wants to do. In that case, we would be living for dead things,” Pope Benedict said.

“Life in abundance is to be in communion with true life, with infinite love,” he said. “That is how we enter truly into the abundance of life and become bearers of life for others as well.”

Returning to the Vatican to recite the Angelus at noon with visitors in St. Peter’s Square, Pope Benedict said the Gospel depiction of Jesus’ crying over the death of Lazarus before raising him from the dead demonstrates that he is both human and divine.

“He is the image, or rather, the incarnation of God who is love, mercy, paternal and maternal tenderness, of the God is who life,” the pope said.