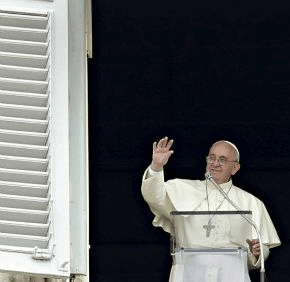 VATICAN CITY – A pope needs friends, needs mercy and needs to reach out to all people, Pope Francis said in two radio interviews released in mid-September.

Pope Francis told Portugal’s Catholic Radio Renascenca that he goes to confession “every 15 days, 20 days. I confess to a Franciscan priest, Father Blanco, who is kind enough to come here and confess me.”

Laughing, the pope said, “I’ve never had to call an ambulance” to carry him away “in shock over my sins!”

In a separate interview with Argentina’s Radio Milenium, Pope Francis was asked how he feels when he hears people refer to him as a global moral leader and a point of reference for all humanity.

“I know that I am a sinner,” the pope responded, and “so I speak with Jesus and tell him, ‘People are so good to think this of me.’ But the good that is in me, I owe to him. It is a gift from God.”

The interviewer, Marcelo Figueroa, a Protestant, was the host of the television program the pope used to appear on in Buenos Aires with Rabbi Abraham Skorka. The radio program broadcast Sept. 13 focused on the biblical idea of friendship, a topic for the television program that was interrupted by the former Cardinal Jorge Mario Bergoglio’s election as Pope Francis in 2013.

Pope Francis told Figueroa, “I’ve never had as many ‘friends’ – in quotation marks – as I have now. Everyone is a friend of the pope!”

However, he said, friendship is something “very sacred.” It involves walking alongside another person. Friendship takes time. And it is not about “using” the other, which Pope Francis said has happened to him, just as it happens to everyone.

Fundamentalists in every religion, he said, judge others and “seek to destroy because they are faithful to an idea, but not to a reality.”

In Judaism, Christianity and Islam, he said, there are people who “transform God into an ideology and also in the name of God kill, attack, destroy and slander.”

In both radio interviews, Pope Francis spoke about his need to be with people, even though it is difficult now that he is pope.

“A priest must be a bridge – that’s why they call a pope pontiff – that is, he must build bridges and not isolate himself,” the pope told Figueroa. “When I say priest, I mean bishops and the pope as well.”

Interacting with people, “I’m not only giving, but I receive. I need the faithful. They give me a gift,” he said. Pope Francis said he is not trying to be an example, “it is my identity. I feel like a priest and it comes spontaneously. Otherwise, I’d just be a church employee.”

He told Radio Renascenca’s Aura Miguel that he really needs to get out of the Vatican more, which is something he is working on. “But I have contact with people on Wednesdays” at his general audience “and this helps a lot. The only thing I really miss from Buenos Aires is going out, walking along the streets.”

Pope Francis also told Miguel he hopes to go to Portugal in 2017 to celebrate the 100th anniversary of the apparitions of Our Lady of Fatima.

In anticipation of the anniversary, Pope Francis said people should do what Mary wants: “The Virgin Mary always asks us to pray, to look after the family and follow the commandments. She doesn’t make odd requests. She asks us to pray for those who have lost their way, for those who say they are sinners – aren’t we all? I am the first.”

Pope Francis also spoke about the huge wave of refugees, particularly from Syria, who were seeking safety and a new life in Europe in August and September.

The summer’s movement of people “is the tip of an iceberg,” he said. “These poor people are fleeing war, hunger, but that is the tip of the iceberg. Because underneath that is the cause; and the cause is a bad and unjust socio-economic system.”

“The dominant economic system today has removed the person from the center, placing the god money in its place, the idol of fashion,” Pope Francis said.

Where profit is more important than job creation, development, peace and safeguarding creation – conditions necessary for a dignified life – people will continue to believe they must move in order to provide for their families, he said.

Miguel also asked the pope what keeps him awake at night. “Can I tell you truth,” Pope Francis responded. “I sleep like a log.”