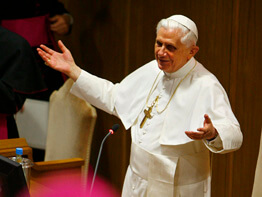 Addressing the annual meeting of the Italian bishops’ conference May 24, Pope Benedict said the bishops’ pro-family initiatives were “in full agreement with the constant teaching of the Apostolic See.”

The bishops have been criticized by some for “interfering” in Italian politics, and the president of the bishops’ conference, Archbishop Angelo Bagnasco of Genoa, has been given a police escort after receiving death threats.

Pope Benedict told the bishops that while the church respects the separation of church and state “we cannot help concerning ourselves with that which is good” for the person, created in the image of God, and for society.

The gathering of some 1 million people in Rome May 12 to celebrate the traditional family and call for family-friendly policies confirmed the fact that Italians still believe in the family, the pope said.

“The significance and role of the family” in Italian society, he said, “needs to be understood and recognized today in the face of a culture that deceives itself that it is promoting people’s happiness by insisting unilaterally on the freedom of individuals.”

The bishops’ May 21-25 meeting at the Vatican also provided Pope Benedict with an opportunity to address some of the plans, priorities and problems individual bishops shared with him over the past five months as they made their “ad limina” visits to the Vatican, which are made every five years to report on the status of their dioceses.

Pope Benedict praised the bishops’ plans to strengthen their evangelization programs, which are aimed both at people who have been baptized but are not practicing Catholics as well as at non-Christian immigrants and their children.

The pope said that as he wrote in “Dominus Iesus,” the document published in 2000 while he was prefect of the Congregation for the Doctrine of the Faith, salvation comes only through Jesus, which is why Christians have an obligation to share the Gospel with others.

“Esteem and respect toward other religions and cultures, with the seeds of truth and goodness that are present in them and which represent a preparation for the Gospel, are particularly necessary today in a world that is growing closer,” Pope Benedict said.

However, he said, respect for others “cannot diminish awareness of the originality, fullness and uniqueness of the revelation of the true God definitively given in Christ.”

“The relativistic cultural climate that surrounds us makes it increasingly important and urgent to solidify and mature in the entire church body the certainty that Christ – God with a human face – is our true and only savior,” the pope said.

Pope Benedict told the bishops that helping people understand who Jesus is was one reason he wrote the new book “Jesus of Nazareth,” adding that it was “a very personal book, not by the pope but by this man.”