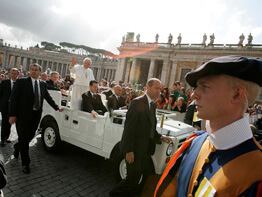 The question has percolated around Rome in recent months as a string of Vatican appointments left Italian prelates in high places.

The pontifical councils that deal with social communications, canon law and cultural issues – until recently headed by an American, a Spaniard and a Frenchman – are now in the hands of Italian bishops.

So are the Vatican Library and Secret Archives. The Vatican City governor’s office, which had been headed by U.S. Cardinal Edmund C. Szoka, reverted to an Italian for the first time in 26 years.
An Italian Jesuit now directs the Vatican Press Office, taking over from a Spaniard.

A number of important middle-management posts at the Vatican, particularly in diplomatic and financial areas, also have gone to Italians.

Some suspect the Italian resurgence may reflect the influence of Italian Cardinal Tarcisio Bertone, the Vatican’s energetic secretary of state, who took office a year ago.

In a recent interview with the Italian Catholic newspaper Avvenire, Cardinal Bertone was asked bluntly: “Is the era of the internationalization of the Roman Curia really over?”

The cardinal responded by pointing out that Italians were still outnumbered by non-Italians as heads of curial offices. He said internationalization was still the way to go, but that geographic identity should never be the determining factor in such appointments.

To illustrate that non-Italians were also being chosen, he cited the recent appointments of a Nigerian protocol chief and a Spanish head of the Vatican’s almsgiving office – not exactly top-level positions.

When the Polish Pope John Paul II was elected in 1978, he was the first non-Italian to sit on the throne of St. Peter in more than 450 years. Many Italians considered this an aberration and fully expected one of their own to succeed him.

When Pope Benedict, a German, was elected instead – in a conclave that by all accounts did not field a strong Italian candidate – it ended any lingering illusion that the papacy belonged to Italy.

But perhaps because he had worked at the Vatican for 24 years, Pope Benedict was familiar with the Italian members of the Roman Curia, appreciated their management skills and began turning to them when it came time to put his own team into place.

So far, he has put nine Italians in charge of key Vatican offices, compared to five people from the rest of the world. When one includes the No. 2 and No. 3 positions in curial offices, the appointments total 18 Italians and seven from other countries.

The Italian presence is most visible in the Secretariat of State, where the top seven officials are now Italian, and in two important offices that control the Vatican’s budget and investment affairs, where all the top people are Italian.

Yet those numbers do not tell the whole story. Of the Vatican’s nine congregations, traditionally the most important of Vatican offices, eight are headed by non-Italians. The lone Italian is Cardinal Giovanni Battista Re, prefect of the Congregation for Bishops.

Early in his pontificate, the pope named U.S. Cardinal William J. Levada as his successor at the Congregation for the Doctrine of the Faith. It’s an appointment that never went down well in some Italian quarters, and the Rome rumor mill regularly churns out speculation – apparently unfounded – that Cardinal Levada may soon be replaced by an Italian.

The pope has since brought in three other “foreigners”: Indian Cardinal Ivan Dias at the evangelization congregation, Brazilian Cardinal Claudio Hummes at the clergy congregation, and Argentine Archbishop Leonardo Sandri at the Eastern churches congregation.

That makes for an unprecedented international mix at the helm of the nine congregations: prelates from nine different countries and five different continents.

In the recent newspaper interview, Cardinal Bertone touched on a related hot topic when he said a reorganization of the Roman Curia was still under study as a hypothesis.

The first few months of Pope Benedict’s pontificate brought reports of an imminent reduction of curial offices, tantalizing those who think the Vatican bureaucracy has grown too large and that the German pope would not hesitate to cut it back.

But as a veteran of the Roman Curia, Pope Benedict no doubt remembers that Pope John Paul had a similar plan at the start of his pontificate. When it was finally implemented after 16 years, it turned out to be a minireform instead of a major overhaul and created as many curial agencies as it eliminated.

Pope Paul VI, who also wrestled with the Vatican bureaucratic structure, once remarked that making major changes to the Roman Curia was like trying to “change tires on a moving car – almost impossible.”