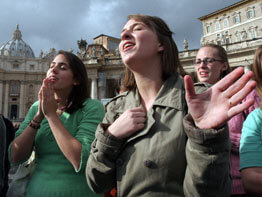 VATICAN CITY – Only through a widespread, coordinated effort to allocate the world’s wealth fairly will it be possible to ensure all people have access to food, water, health care, employment and needed energy resources, Pope Benedict XVI said.

Answering this “great challenge of our time” can only come about if “a global model of authentic solidarity prevails,” he said during his Nov. 11 Angelus address in St. Peter’s Square.

The pope recalled that the day marked the feast day of St. Martin of Tours, “the saintly monk and bishop who was moved with such great compassion for the sufferings of the poor.”

He said St. Martin carried out Christ’s “logic of sharing, with which one expresses authentic love for the other,” when the saint cut his own cloak in half to clothe a poor, shivering man he had encountered on the street.

“Only through a common commitment to sharing is it possible to respond to the great challenge of our time: that is to build a world of justice and peace where everyone can live in dignity,” the pope said.

A global model of authentic solidarity, he said, would ensure that all people on the planet have “food, water, necessary medical care, but also employment (and) energy resources,” as well as be able to benefit from cultural riches and scientific and technical know-how.

After praying the noonday Angelus, the pope also praised the important role farmers play in feeding the world’s people and protecting the environment.

Recalling that Italians celebrated Thanksgiving Nov. 11, the pope said, “Let us pray so that the tillers of the earth may be able to live and work in serenity and prosperity and care for the environment for the good of all people.”

In a separate audience, the pope appealed to Catholic volunteers to increase their charitable activities.
During a Nov. 10 address in St. Peter’s Square to some 40,000 members of Italian confraternities, the pope praised the groups’ generous dedication to the poor, the sick and the suffering.

Confraternities began to spring forth during the Middle Ages, the pope noted, when there was a lack of government structures offering social and medical assistance for the weakest and poorest in society.

Such situations of people in need of aid have lingered through the centuries, he said, even to the present day.

Despite “an increase in (Italy’s) economic well-being, pockets of poverty have not altogether disappeared and therefore today, as in the past, there is much to do in the field of solidarity,” he said.

“I encourage you to multiply the initiatives and activities of each of your confraternities,” he told his audience.