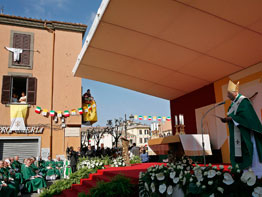 VATICAN CITY – In a videotaped message, Pope Benedict XVI said he wants to bring a message of Christian hope to all Americans and to the United Nations when he visit in mid-April.

“I shall come to the United States as pope for the first time to proclaim this great truth: Jesus Christ is hope for men and women of every language, race, culture and social condition,” the pope said.

He said he intends to reach out spiritually to U.S. Catholics and show fraternity and friendship to other Christians, to followers of other religions and to all people of good will.

The text of the papal message, released at the Vatican April 8, was designed to set the thematic stage for the pope’s April 15-20 visit to Washington and New York.

The pope read the text, mostly in English but with a short section in Spanish, while seated at a desk beneath a painting of Mary and Jesus.

Rather than focus on specific events, the pope spoke about the theme of his visit, “Christ Our Hope.” Those three words express the church’s belief that Christ is the face of God in human history and gives fullness to people’s lives, he said.

“I know how deeply rooted this Gospel message is in your country. I am coming to share it with you, in a series of celebrations and gatherings,” he said.

He thanked people for their prayers for the success of his visit, saying that “prayer is the most important element of all.” Without intimate union with the Lord, he said, human endeavors would mean very little.

“It is God who saves us, he saves the world and all of history. He is the shepherd of his people. I am coming, sent by Jesus Christ, to bring you his word of life,” he said.

The pope said his message of Christian hope had particular relevance to the United Nations, at a time when the world needs hope more than ever before – hope for peace, justice and freedom.

But he said this hope can never be fulfilled without obedience to the law of God, which Christ expressed in the commandment to love one another.

“Do to others as you would have them do to you, and avoid doing what you would not want them to do. This ‘golden rule’ is given in the Bible, but it is valid for all people, including nonbelievers,” he said.

The pope said that although his itinerary will take him only to two cities, his visit aims to reach out to everyone, especially those in need.

“I want you to know that … my heart is close to all of you, especially to the sick, the weak and the lonely,” he said.

Jesuit Father Federico Lombardi, the Vatican spokesman, told reporters April 8 that the pope could be expected to focus largely on religious and moral values during his visit.

During his three-hour visit to the United Nations, he said, the pope will probably concentrate on human rights, since this year marks the 60th anniversary of the U.N. Universal Declaration of Human Rights.

At ground zero in New York, the spokesman said, the pope will not make a speech, but will descend to the bottom of the 70-foot-deep pit, recite a prayer and light a candle in remembrance of those who died in the Sept. 11, 2001, terrorist attacks.

There he will also will greet 24 people representing those involved in the Sept. 11 tragedy: survivors, relatives of the dead, and members of the police, fire and civil defense departments.