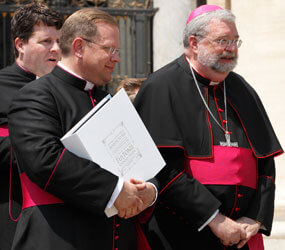 VATICAN CITY – When Bishop Daniel R. Jenky of Peoria, Ill., presented Pope Benedict XVI with two thick volumes about the life of Archbishop Fulton J. Sheen, the pope surprised him by saying he had worked with the late archbishop.

Pope Benedict “told me something I hadn’t known: he worked on the commission for mission at the Second Vatican Council with Fulton Sheen,” Bishop Jenky told Catholic News Service. The pope served as a theological expert at the council in the 1960s.

At the end of the pope’s weekly general audience May 25, Bishop Jenky presented the pope with two leather-bound volumes with golden lettering on the side: “Fultonius Ioannes Sheen.”

The tomes – totaling close to 2,000 pages – are the “positio,” the official position paper, outlining why the Catholic Church should recognize Archbishop Sheen as a saint.

Archbishop Sheen, who was born in Illinois in 1895 and died in New York in 1979, was an Emmy-winning televangelist. His program, “Life is Worth Living,” aired in the United States from 1951 to 1957.

Bishop Jenky said, “I hope it helps” that the pope personally knew Archbishop Sheen, who was national director of the Society for the Propagation of the Faith in 1950-66 and attended every session of Vatican II.

For the Peoria bishop, the most impressive thing about Archbishop Sheen was his untiring evangelizing effort, which was addressed not just to radio or television audiences, but to taxi drivers and anyone else he happened to meet.

“I don’t know how many people he brought to the faith; it must be thousands and thousands,” the bishop said. “He never passed by an opportunity to bring someone to the faith. He was a hands-on evangelizer.”

They also gave the pope an album with more than 100 letters from cardinals and bishops in North America, Australia and Africa supporting Archbishop Sheen’s cause.

Monsignor Deptula told CNS that Archbishop Sheen should be beatified and canonized because “he was a dynamic missionary, he used all the modern means available to spread the Gospel throughout the world.” In fact, the archbishop was host of “The Catholic Hour” radio program for 22 years before beginning his television career, he wrote several popular books and traveled the world speaking and preaching once his TV program went off the air.

The diocesan phase of the sainthood cause concluded in 2008 and the postulator, or promoter, of the cause took the eight boxes of eyewitness testimony and “every book Sheen ever wrote” and summarized the material, creating the “positio,” the monsignor said.

The Congregation for Saints’ Causes will study the “positio” and if congregation members agree, they will recommend that the pope officially declare that the archbishop lived the Christian virtues in a heroic way.

Before Archbishop Sheen can be beatified, the pope also must recognize a miracle attributed to his intercession.

“We actually have two fully-documented alleged miracles of cures that seem to have been effected by God through the intercession of Archbishop Sheen,” Monsignor Deptula said. “Actually, we also have a couple more that have come into our office. Really, every day I hear stories about little miracles, ways that Fulton Sheen continues to change lives today.”

The best documented cases involve cures that took place in the United States, he said. “One happened in central Illinois to an elderly woman in the Champaign area. And the other, kind of the stronger case that we will probably be pursuing to present to the Holy Father, involved a baby in the Pittsburgh, Pennsylvania, area.”

The monsignor said he could not reveal many details about the case, but “basically this baby was born … with several life threatening diseases, any one of which would have been a very serious illness for this infant.”

“The parents and family and friends prayed for the intercession of Archbishop Sheen. They had the baby baptized, (and) I believe his middle name is Fulton,” he said. “It seems to have been a miracle. The baby lived and seemed to have been cured of those illnesses” and is now in the first or second grade.