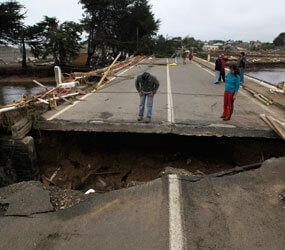 VATICAN CITY – Pope Benedict XVI prayed for the victims of the massive earthquake in Chile and pledged the assistance of Catholic relief organizations.

The pope made the remarks at his noon blessing Feb. 28, the day after a magnitude 8.8 quake struck the South American country, triggering giant waves and leaving at least 700 dead.

“My thoughts are with Chile and with the populations stricken by the earthquake, which caused great loss of life and terrible damage,” the pope said from his apartment window above St. Peter’s Square.

“I am praying for the victims and am spiritually close to those affected by this serious catastrophe. For them, I ask God to grant relief of suffering and courage in this adversity. I am sure solidarity will be shown by many, in particular by church organizations,” he said.

Chile was moving about 10,000 troops into affected cities to maintain order and prevent looting. Many stricken towns in central Chile, the worst-hit area, were still cut off, so authorities feared the death toll could climb much higher.

Bishop Alejandro Goic Karmelic of Rancagua, president of the Chilean bishops’ conference, said in a message to the country that the Catholic Church would mobilize to help meet the people’s spiritual and material needs.

“With the strength of the Gospel, we are bearers of hope in moments of anguish, pain and devastation. To the public authorities, to those working for the state and to volunteer organizations, we offer our help,” he said.

A superior of the Sons of Divine Providence religious order in Chile, Father Roberto Simionato, reported that churches and church administrative buildings were among those damaged in the hard-hit city of Concepcion.

He said that when the earthquake struck at 3:34 a.m., he thought it would pass like other previous tremors in Chile. But after 30 seconds, the quake was still getting stronger, he told the Vatican missionary agency Fides.

“It was frightening in its intensity. As it went on, things began to collapse, the noises grew louder and the lights went out. I remained still in bed. When it was over I went down to the courtyard and found all the priests. We checked to make sure we were all there and that no one was harmed,” he said.

He said the damage in Concepcion was extremely heavy, with collapsed houses, fires, sunken streets and no electricity, water or telephone service.

Caritas Internationalis reported from its Rome headquarters that Caritas Chile was mobilizing to respond to the catastrophe, and working with civil authorities to establish a national help network. The first emergency aid was being distributed in Maule and Bio Bio, the worst-affected regions, according to a Caritas statement.

“We are collecting food to be sent immediately to communities which have been most affected by the earthquake and where shortages are already being reported. Our own communications network and capacity to offer warehouses and points of collection and distribution are immediately available,” said Caritas Chile Director Lorenzo Figueroa.

“The magnitude and depth of the catastrophe which has affected the poorest regions of the country will require the support of Caritas members in Latin America and worldwide. Above all, hope is needed among our suffering people,” he said.

The president of Caritas Internationalis, Honduran Cardinal Oscar Rodriguez Maradiaga, said Caritas Chile and the local bishops were providing updates on the needs of the people.

“Chile has faced a terrible catastrophe. The Caritas confederation will be there in support of the survivors in this initial phase of emergency response and as they look to rebuild the country,” the cardinal said.

Caritas centers in 23 dioceses and archdioceses in Chile have been mobilized with help from the parishes.

Archbishop Ricardo Ezzati Andrello of Concepcion condemned the actions of those using the chaos to loot, saying they were responsible for a “second earthquake.”