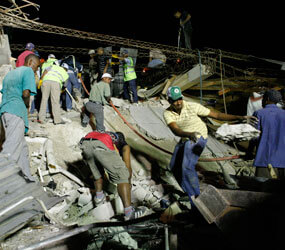 VATICAN CITY – Pope Benedict XVI prayed for victims of a massive earthquake in Haiti and urged the international community to provide generous assistance to the stricken population of the Caribbean nation.

“The lifeless body of Archbishop Joseph Miot of Port-au-Prince was found this morning under the rubble of the archbishops’ residence,” L’Osservatore Romano said in a Page 1 story Jan. 13.

Archbishop Bernardito Auza, the Vatican’s apostolic nuncio in Haiti, told the Vatican missionary news agency Fides: “Port-au-Prince is completely devastated. The cathedral and the archbishop’s residence, all the big churches, all the seminaries are reduced to rubble.”

Pope Benedict made his appeal at the end of his general audience Jan. 13, some 12 hours after a magnitude 7 earthquake struck Haiti, toppling buildings and causing widespread destruction. The number of casualties was not immediately known, but local officials called it a major catastrophe.

Pope Benedict said he wanted to highlight the dramatic situation in Haiti following the “devastating earthquake, which resulted in serious loss of human life, a great number of homeless and missing, and enormous material damage.”

“I appeal to the generosity of everyone, so that our brothers and sisters receive our concrete solidarity and the effective support of the international community in this moment of need and suffering,” he said.

He said the Catholic Church’s charity organizations would immediately move into action to assist those most in need.

“I invite everyone to join in my prayer to the Lord for the victims of this catastrophe and for those who are mourning their loss. I assure my spiritual closeness to people who have lost their homes and to all those affected in various ways by this calamity, imploring from God consolation and relief of their suffering,” he said.

Archbishop Auza said he had toured the capital on the morning after the earthquake and found the country’s ministry buildings, schools and supermarkets destroyed. He said the headquarters of the U.N. stabilization force in Port-au-Prince had completely collapsed, reportedly trapping hundreds in the debris.

“I found priests and nuns on the street, who no longer have homes. The rector of the seminary survived, and so did the dean, but the seminarians are under the rubble. Everywhere there are cries coming from under the rubble,” he said.

He said a study institute for men and women religious had collapsed, with many students inside as they attended a conference. The nunciature withstood the quake, and there were no injuries there, he said.

“We cannot enter or stay inside for very long because the earth continues to tremble. So we’re camped out in the garden,” he said.

Caritas Internationalis, the Vatican-based umbrella organization for Catholic charities, said it was mobilizing to provide immediate assistance to Haiti. On Jan. 13 it had already assembled an emergency relief team to fly to Haiti to assist Caritas members already working in the country. It said there had not yet been contact with the Haitian Caritas office.

“There is a strong Caritas presence in Haiti. We already know that Caritas staff will be providing support to survivors of the earthquake, such as food, shelter and comfort through churches and parish networks,” Dutton said.

“A priority for Caritas will be to assess the damage and our local capacity to provide aid to survivors of the quake. Caritas runs more than 200 hospitals and medical centers in Haiti. It is experienced and prepared to respond to humanitarian disasters there as a result of the frequent hurricanes,” he said.

“Communication with our staff on the ground is difficult, but we are piecing together a picture of desperate need. Haiti is the poorest country in the Western Hemisphere. Conflict, recent natural disasters, and poverty have left Haitians with weak infrastructure. Working in that environment will be difficult,” he said.

In its statement, Caritas said the cathedral in the Haitian capital of Port-au-Prince was badly damaged.

Caritas also said the U.S.-based Catholic Relief Services had been in communication with its staff in Haiti. The local CRS office was still standing and CRS staff present at the time of the quake were safe, it said. CRS staff described the quake as “a major hit … a direct hit.”