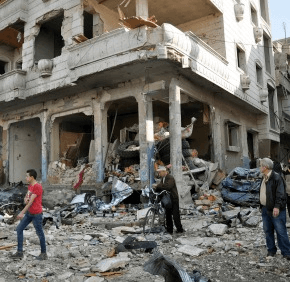 By Cindy Wooden
Catholic News Service
VATICAN CITY – As a brief cease-fire agreement failed and Syrian government forces returned to bombing Aleppo and fighting rebels in the city streets, Pope Francis made a forceful appeal for assistance for the thousands of innocent civilians trapped in the besieged city.
“I appeal to the consciences of those responsible for the bombardments,” Pope Francis said at the end of his weekly general audience Sept. 28. “They will have to account to God!”
Dozens of civilians were reportedly killed by the bombardments in late September and the U.N. World Food Program said it was “extremely concerned about the more than 250,000 people trapped in eastern Aleppo city who are cut off from food, water, medicine and other essential supplies.”
Pope Francis told people gathered for his general audience that his thoughts and prayers were going “to the beloved and martyred Syria. I continue to receive dramatic news about the fate of Aleppo’s population.”
Expressing his “profound pain and deep concern for what is happening in this already martyred city,” the pope told people that it is a place where death strikes “children, the elderly, the sick, young people, old people, everyone.”
“I renew my appeal that everyone make a commitment with all their strength to the protection of civilians as a mandatory and urgent obligation,” the pope said.
Pope Francis spoke as representatives of dozens of Catholic charitable organizations and leaders of Catholic communities in Syria and Iraq were arriving in Rome for a Sept. 29 meeting to coordinate Catholic emergency and humanitarian assistance to the victims of war, displaced people and refugees in the region.
Msgr. Giampietro Dal Toso from the Pontifical Council Cor Unum, which coordinates Catholic charitable giving, said the Catholic Church and Catholic charities have 12,000 workers trying to provide care for people in Syria, Iraq and neighboring countries.
“Just in Syria the victims of the war, according to U.N. data, already exceed 270,000,” he said. More than 8.7 million Syrians have been forced from their homes and some 3.4 million Iraqis are still displaced.
Copyright ©2016 Catholic News Service/U.S. Conference of Catholic Bishops.
See also:
Fight hatred with love, respect for others, pope tells Nice survivors
Pope, Christian leaders pray for peace, victims of war
PrevNext