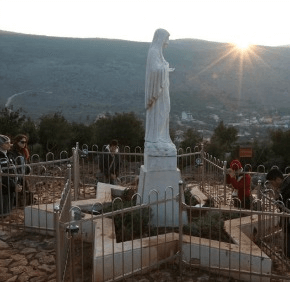 By Cindy Wooden
Catholic News Service
VATICAN CITY – Without commenting on the authenticity of alleged Marian apparitions in Medjugorje, Bosnia-Herzegovina, Pope Francis has appointed a Polish archbishop to study the pastoral needs of the townspeople and the thousands of pilgrims who flock to the town each year.
The pope chose Archbishop Henryk Hoser of Warsaw-Praga as his special envoy to Medjugorje, the Vatican announced Feb. 11.
“The mission has the aim of acquiring a deeper knowledge of the pastoral situation there and, above all, of the needs of the faithful who go there in pilgrimage, and on the basis of this, to suggest possible pastoral initiatives for the future,” the Vatican announcement said.
Archbishop Hoser’s assignment has “an exclusively pastoral character,” the Vatican said, making it clear his task is separate from the work of a commission set up in 2010 by now-retired Pope Benedict XVI to investigate the claims of six young people who said Mary had appeared to them daily beginning in 1981. Some of the six say Mary still appears to them and gives them messages each day, while others say they see her only once a year now.
Pope Benedict had named retired Italian Cardinal Camillo Ruini to chair the group studying the apparitions. In June 2015, Pope Francis told reporters that Cardinal Ruini had given him the group’s report and that it would be studied by the cardinals and bishops who are members of the Congregation for the Doctrine of the Faith. At the time, Pope Francis said, “We’re close to making decisions,” although nothing was announced until the appointment of Archbishop Hoser about 20 months later.
Thousands of pilgrims travel to the small town each month to meet the alleged seers and to pray. Because the apparitions have not been approved, the Vatican has said dioceses should not organize official pilgrimages to Medjugorje. However, it also has said Catholics are free to visit the town and pray there, and that the Diocese of Mostar-Duvno and the Franciscans who minister in the town should organize pastoral care for them.
The Vatican’s February announcement said that Archbishop Hoser “is expected to finish his mandate as special envoy by summer of this year.”