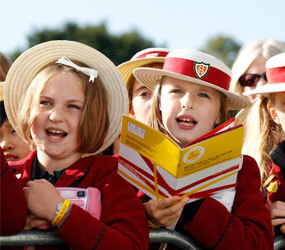 LONDON – In a rousing encounter with some 4,000 schoolchildren, Pope Benedict XVI asked them to make friendship with God the center of their lives.

“We need to have the courage to place our deepest hopes in God alone, not in money, in a career, in worldly success or in our relationships with others, but in God. Only he can satisfy the deepest needs of our hearts,” the pope said Sept. 17 in Twickenham, a suburb of London.

He spoke to a cheering crowd of Catholic students who filled a soccer field next to St. Mary’s University College, and via Internet to the more than 800,000 young people who followed the event from their classrooms at Catholic schools throughout Great Britain.

The pope arrived a little late at the university, but he paused to greet some of the uniformed young students one by one, shaking their hands and accepting flower bouquets.

In a sense, Pope Benedict, a former university professor, was back in his favorite milieu. But on this particular day, he spoke more as a pastor than a theologian, offering a straightforward lesson on the path of sainthood.

Wearing a blue batik stole sent by students watching via internet in Gambia, the pope said he hoped that among his listeners there would be “future saints of the 21st century.”

“What God wants most of all for each one of you is that you should become holy,” he said, speaking from a giant red throne on a stage built for the occasion.

The pope acknowledged that “perhaps some of you think being a saint is not for you.” He reminded the students that the contemporary “celebrity culture” encourages young people to find models in sports or entertainment figures, but he suggested they look at deeper qualities they would like to have in their own lives.

Money and skill may make them famous, but it will not make them happy, he said.

“Happiness is something we all want, but one of the great tragedies in this world is that so many people never find it, because they look for it in the wrong places. The key to it is very simple – true happiness is to be found in God,” he said.

The pope said growing close to God was not unlike meeting a new friend, and hoping “they will find you interesting and attractive, and want to be your friend.”

“God wants your friendship. And once you enter into a friendship with God, everything in your life begins to change,” he said. For one thing, he said, the practice of virtue becomes important. Greed and selfishness are recognized as destructive tendencies that cause great suffering, and compassion is born, he said.

“And once these things begin to matter to you, you are well on your way to becoming saints,” he said.

The pope urged the students to avoid an overly narrow focus in their future studies, and to remember that the religious and ethical dimension is always a part of education. He also greeted the many non-Catholics studying in Catholic schools, and said they help ensure that respect for members of other religious traditions is among the virtues learned in church-run schools.

The students presented the pope with three books to add to his own library: a volume written by St. Bede, a book of Scottish poetry and a book about the Catholic martyrs of Wales.

The pope inaugurated a sports foundation named after Pope John Paul II at the university, which will be used as a training facility for the 2012 London Olympics.

Earlier, in the university chapel, he met with British education authorities and about 300 men and women religious who teach in Catholic schools. He paid tribute to the great contribution of religious orders in education, especially noting the work of Sister Mary Ward, whose beatification cause has moved forward at the Vatican.

In the early 17th century, Sister Ward founded the Congregation of Jesus and of the Institute of the Blessed Virgin Mary, often known as the “English Ladies,” drawing the ire of church authorities of that time for the unconventional structure of the order.

“I myself as a young boy was taught by the ‘English Ladies,’ and I owe them a deep debt of gratitude,” the pope said. He said real education is never simply a utilitarian exercise in imparting information of skills, but is about imparting wisdom.

The pope also told the school officials that he appreciated their efforts to ensure that Catholic schools provide a “safe environment” for children.

“Our responsibility toward those entrusted to us for their Christian formation demands nothing less,” he said.