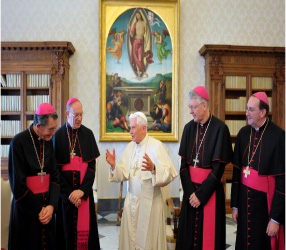 VATICAN CITY – In the wake of a case of sexual abuse by a bishop, the Catholic Church in Belgium has been “put to the trial by sin,” Pope Benedict XVI told the country’s bishops.

The pope prayed that Belgian Catholics “would not forget that only Christ can calm every storm” and that Belgian priests would find “new courage and strength to live a holy life in full fidelity to their ministry, to their consecration to God and to Christian witness.”

Pope Benedict spoke to the Belgian bishops May 8 at the end of their “ad limina” visits to the Vatican to report on the status of their dioceses.

The pope did not specifically mention Bishop Roger Vangheluwe of Brugge, who resigned April 23 after admitting that while a priest and during the first years he was a bishop, he sexually abused a boy.

Meeting reporters after the papal audience May 8, Archbishop Andre-Joseph Leonard of Mechelen-Brussels, president of the Belgian bishops’ conference, said the pope “obviously referred to the drama we lived in Belgium, in the archdiocese of Brugge, and he spoke about it briefly, knowing that all the rest was already understood and already said.”

Bishop Johan Bonny of Antwerp told Catholic News Service May 7 that as cases of clerical sexual abuse were being reported in several European countries over the past few months, the Belgian bishops urged their own people, “if there is a problem to bring it out. If the statute of limitations has not expired to go to the police and the courts and if it has expired, to go to the commission” set up by the bishops 13 years ago.

“Some people came forward, but we didn’t find any new cases, only old ones and only a few,” Bishop Bonny said. Then, he said, Bishop Vangheluwe’s past “was brought up by his own family because he abused one of his nephews. So it was a child in his own family and it was his own family who couldn’t live with the secret anymore.”

At a news conference at the Belgian College in Rome May 7, Archbishop Leonard said, “In Belgium, we are truly determined to be firm, transparent and rigorous on this question.”

The church’s “first task is transparency and humility,” he said. “We want to ensure that never again will we have a priest – or bishop – with such a grave sin in his past.”

Archbishop Leonard told L’Osservatore Romano, the Vatican newspaper, that victims of clerical sexual abuse in Belgium are strongly encouraged to go to the police as well as to report the abuse to the church commission.

“We can offer them only moral assistance and support. It is very important that the victims are listened to, but they must also report the facts to the magistrate,” he said.

The bishops have encouraged reporting abuse to the police not only because “the judicial authorities have the means to conduct investigations and to ascertain the truth of the facts,” he said, but also “because we want to avoid being accused of shielding the guilty or trying to settle.”

Pope Benedict’s speech to the bishops focused mainly on the need to strengthen Belgian Catholics’ faith and their commitment toward living that faith publicly, including in their political lives.

In the past few years, Belgium has legalized abortion, euthanasia, same-sex marriage and the adoption of children by gay couples.

Bishop Bonny told CNS it was obvious that the sex abuse scandal has made it even more difficult for the bishops to be taken seriously when they try to address matters of public policy.

“Obviously, it has damaged our credibility and people’s trust in us and that’s a shame,” he said. “But it also may bring some Catholics together in a renewed awareness of their own responsibility” to bring Christian values to public life, he said.