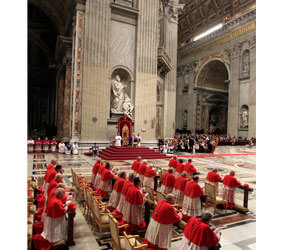 VATICAN CITY – Pope Benedict XVI welcomed the beginning of Advent with a prayer for life and a defense of the human embryo.

The pope presided over an evening prayer service at the Vatican Nov. 27, part of a worldwide pro-life vigil. He said it was an appropriate initiative to launch Advent, the liturgical period in which the church prepares to celebrate the birth of Jesus.

In a homily, he said the church’s teaching against abortion comes from its teaching about the dignity of every human life and its concern that the unborn is most vulnerable to “the selfishness of adults and the clouding of consciences.”

“There are cultural tendencies that seek to anesthetize consciences with spurious arguments,” the pope said.

Regarding the human embryo, the pope said science itself has demonstrated the embyro’s autonomous capacity of interaction with the mother, the coordination of its biological processes, the continuity of its development and its complexity as an organism.

“It’s not a question of a collection of biological material, but of a new living being, dynamic and marvelously ordered, a new individual of the human species,” he said.

“This is how Jesus was in Mary’s womb; this is how we each were, in our mother’s wombs,” he said.

The pope cited the early church author Tertullian, who reasoned that abortion is wrong because, as he wrote, “He is a man, who is to be a man.” The pope added that “there is no reason not to consider him a person from the moment of conception.”

Pope Benedict emphasized that the threat to human life does not end at birth. He said children today are often subject to abandonment, hunger, poverty, disease, abuse, violence and exploitation. Faced with this “sad panorama of injustices” before and after birth, the church calls everyone to responsibility, he said.

He urged leaders in politics, economics and communications to do everything possible to promote a culture that respects human life and to establish a network of services that support human life.

On Nov. 28, the first Sunday of Advent, the pope spoke to pilgrims from his apartment window about the importance of “expectant waiting” in the period before Christmas and in people’s lives in general.

“We think of the expectation of a child by a married couple, or of a visit by a distant relative or friend. We think of a young person who awaits the outcome of a decisive examination, or a meeting at work,” he said.

“One can say that a person is alive as long as he is expectant, as long as hope lives in his heart,” he said.