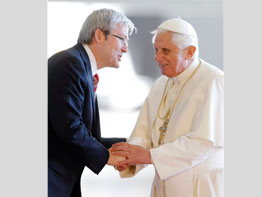 SYDNEY, Australia – Pope Benedict XVI’s first pastoral visit to Australia concluded July 21 with a farewell ceremony at Sydney’s international airport, where he told an audience of invited guests, including church and civic officials, how much he had enjoyed his July 12-21 stay.

He thanked Australians for their hospitality and made special mention to the “families in Australia and New Zealand who hosted pilgrims. You made room for the pilgrims in your homes – I particularly thank you.”

The pope described the departing World Youth Day pilgrims as “united in faith and love and empowered in the Spirit to be witnesses in Christ to the ends of the earth. For the sacrifices of young pilgrims to get here, the church is grateful.”

“During Would Youth Day we saw a sea of flags from practically every corner of the earth. A hard-bitten Sydney has taken the pilgrims” to its heart, he said.

Rudd said his government would be working with the Holy See on the “great challenges of our time – human rights, political and religious freedom, arms control and disarmament and climate change.”

Earlier that morning, the pope met with 8,000 World Youth Day volunteers at The Domain, a popular Sydney venue for outdoor concerts and large gatherings and rallies, and thanked them for their service.