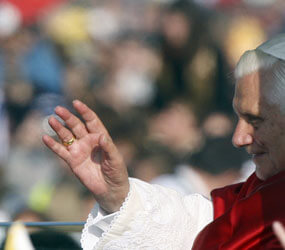 ABOARD THE PAPAL FLIGHT TO THE CZECH REPUBLIC – Pope Benedict XVI said he is pleased that his recent encyclical has prompted increased debate over the role of the profit motive in world economies.

During a two-hour flight Sept. 26 from Rome’s Ciampino airport to the Czech Republic, the pope answered questions on subjects journalists had submitted to the Vatican press office a few days before the flight.

One of the questions, read by the Vatican spokesman, Jesuit Father Federico Lombardi, sought the pope’s reaction to the large amount of media attention given to his recent encyclical, “Caritas in Veritate” (“Charity in Truth”).

“I am very happy with this great discussion” and “the debate under way seems encouraging,” he said.

“That was exactly my aim: to initiate and motivate a discussion about these problems, to not let things be as they are, but to find new models of a responsible economy both in individual countries and for the whole of humanity,” he said.

It seems glaringly evident today, he said, that ethics should not be excluded from the economy.

He said economic systems “do not work if they do not take into account the human values of solidarity and mutual responsibility.”

Integrating an ethical framework into an economic system is the challenge today, and he said he hoped his encyclical in some way helped.

The pope was also asked how his wrist injury was healing and whether he was able to get much work done on his second volume of a book on Jesus of Nazareth.

Pope Benedict said his right wrist has still not fully recovered from being broken after he fell this summer, but that it has healed enough so that he can write again.

He said his wrist, which he broke July 17, “has still not fully recovered, but you can see my right hand does work and I can do the essentials. I can eat and, above all, I can write.”

He told reporters aboard his Alitalia charter jet that the five weeks his hand was in a cast and the subsequent days of recovery were very difficult for him. “My thoughts mostly develop through writing, so for me it was truly a test of patience to not be able to write for six weeks,” he said.

“All in all, I was able to work, read, do other things and I did make a little progress on the book, but there is still a lot to do,” including the bibliography, he said.

But, he said, God willing, the book “could be finished by the spring. But this is a hope.”

The book is expected to cover Christ’s childhood, passion, death and resurrection. The first volume, the best-selling “Jesus of Nazareth,” was published in 2007.