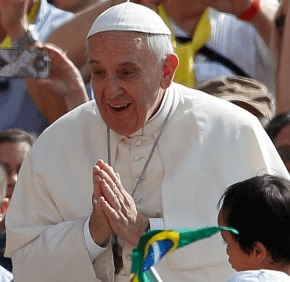 VATICAN CITY – Pope Francis said he wants to be remembered as “a good person who tried to do good. I cannot ask for anything more than that.”

The statement, as well as comments about his life as pope and situations that move him to tears, were part of an interview he gave in late May to “La Voz del Pueblo,” a newspaper from Tres Arroyos, Argentina. The Vatican newspaper printed a translation of the interview May 25.

Pope Francis insisted he never dreamed of being pope, “nor of being president of the republic or general of an army. Some people have those dreams. I didn’t.”

The only newspaper Pope Francis said he reads is the Italian daily “La Repubblica,” which he described as a newspaper for “the middle class.”

The reporter asked how he keeps up with soccer, his favorite sport, if he doesn’t watch television. “Every week one of the Swiss Guards brings me the results and the rankings,” the pope responded.

Pope Francis has spoken several times about “the gift of tears,” and Juan Berretta, who conducted the interview, asked him what makes him cry.

Dramatic human situations, the pope replied. “Like the other day when I saw what is happening to the Rohingya people (from Myanmar),” who have piled on to boats seeking asylum. “When they get close to shore, they are given something to eat, some water, then pushed back out to sea.” Thousands of them have been on the seas for weeks.

Sick children also bring the pope to tears, he said, especially those suffering from diseases “provoked by inattention to the environment. This breaks my heart. When I see those creatures I say to the Lord, ‘Why them and not me?’“

Visiting juvenile detention centers and prisons also is emotional, he said. Talking to the prisoners he always thinks, “‘I could be here.’ In other words, none of us can be certain that we would never commit a crime, something for which we’d be imprisoned.”

While the pope said such things make him “weep inside,” he said, “I don’t cry publicly. Twice it has happened that I was on the brink of crying, but I was able to stop myself. I was too moved and a tear or two escaped, but I pretended nothing was happening and after a minute I wiped my face with my hand.”

The journalist asked the pope why he didn’t want to be seen crying. He responded, “I don’t know, it just seemed like I had to keep going.”

Asked if he was afraid of anything, Pope Francis said: “I am fairly fearless; I act without thinking about the consequences. Sometimes this creates headaches because I’ll say more than I should.”

As far as his physical safety, the pope repeated what he has said in the past. He has placed himself in God’s hands, but has prayed that if he is attacked, the physical pain won’t be too great. “I am a coward when it comes to physical pain.”

Saying the media reported he came in second in the 2005 conclave to succeed St. John Paul II, Pope Francis said that at the time, “it was clear that it had to be Benedict, who was voted for almost unanimously, and I was very pleased.”

Asked about his popularity, the pope said: “At first I didn’t understand why it was happening. Some of the cardinals told me it was because the people say, ‘We understand him.’“

“I try to be concrete and what you call magnetism some cardinals have told me has to do with the fact that people understand me,” Pope Francis said.

Living in the Domus Sanctae Marthae, which is a Vatican guesthouse, spending hours with people at his weekly general audience and inviting a small group for morning Mass four times a week “is good for me,” he said. The people “give me positive energy.”

“I became a priest to be with people,” the pope said. “I give thanks to God that this is still true.”