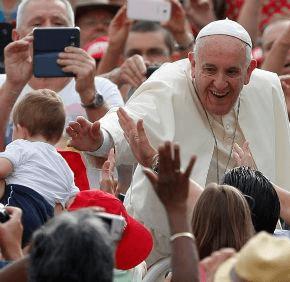 VATICAN CITY – Pope Francis asked for prayers for his trip to Cuba and the United States, calling it “a mission” he had high hopes for.

He said while the main purpose of his 10th apostolic journey abroad, Sept. 19-28, was to attend the World Meeting of Families in Philadelphia, he also highlighted his planned visit to the United Nations in New York as it marked its 70th anniversary.

“I greet with affection the Cuban people and the people of the United States, who, guided by their pastors, have spiritually prepared” for the visit – “a mission I’m preparing for with great hope,” the pope said at the end of his weekly general audience in St. Peter’s Square Sept. 16.

The pope said his talk Sept. 16 would be his last audience talk on the family and marriage, thus concluding a series he began in December 2014. The reflections were meant to help prepare for the now imminent World Meeting of Families Sept. 22-27 and the gathering of the Synod of Bishops on the family in Rome Oct. 4-25.

A correct vision and culture of the family are necessary for defending the world from many threats, he said in his catechesis.

Society today seems like it is being run by an “economic technocracy,” which has “massive resources and enormous media support” at its disposal and has made ethics subordinate to “the logic of profit,” he said.

“A new covenant between man and woman becomes not just necessary, but also strategic in order to free people from the colonization of money,” he said. “This covenant must once again guide policy, the economy and social coexistence.”

God did not design the family to cultivate an intimacy whose sole goal is taking care of itself, he said, but gave it a loftier, more “thrilling project of taming the world.”

The family, he said, is the beginning and the foundation of the kind of global culture that will save humanity from many attacks, destruction and “ideological colonization that so threatens the world. The family is the basis for defending oneself.”

How men and women live together in their families has a major impact on everything, including the state of the environment, passing on an awareness of life and the bond between memory and hope, he said.

Refusing God’s blessing to be custodians of creation leads “fatally to a delirium of omnipotence that ruins everything,” he said.

However, despite the stain of original sin, “we are not cursed or left to fend for ourselves,” the pope said.

Pope Francis said God reached out in a special way to women when he told the serpent in the garden that “I will put enmity between you and the woman and between your offspring and hers,” and she will always strike at serpents.

“God marks the woman with a protective shield against evil,” the pope said, which means she “carries a secret and special blessing” to be able to defend her offspring from the devil.

While too often the woman is displayed as a temptress leading others toward evil, he said, “there is room for a theology of women that is commensurate with this blessing by God” that makes her and her decedents strong adversaries against evil.

Christ was born of a woman, and he “is God’s caress upon our wounds, our mistakes, our sins. But God loves us as we are and he wants to bring us forward with this plan” of salvation, Pope Francis said, adding that “the woman is the one who is stronger, carrying forward this plan.”

The pope concluded by saying salvation is meant for everyone and that with “sufficient faith, families on earth will recognize this blessing.”

Speaking in Italian to pilgrims from Arab-speaking countries, the pope summarized his main talk by emphasizing how the more the marriage bond between a man and woman is weakened, the more all human ties will be harmed.

“Let us work then to repel everything that makes light of marriage; every form of injustice and inequality, especially toward women,” he said. “Let us work to establish a new covenant between a man and woman based on respect, equality and love.”