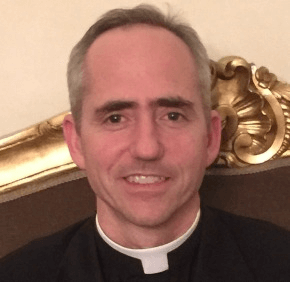 By George P. Matysek Jr.
gmatysek@CatholicReview.org
Twitter: @ReviewMatysek
It was at the very end of a routine Sept. 19 meeting in Rome when Cardinal Leonardo Sandri, prefect of the Congregation for Eastern Churches, announced one more item to discuss.
Reading from a letter in Latin from Cardinal Pietro Parolin, secretary of state for the Holy See, Cardinal Sandri revealed to applause that two members of his staff had been elevated by the pope to the status of “monsignor.” One of those receiving the honorary title was Monsignor McLean Cummings, a 50-year-old priest of the Archdiocese of Baltimore who has ministered at the Congregation for Eastern Churches five years.
“The first thing one thinks of is, ‘Now I have to get a new cassock,’” joked Monsignor Cummings in an Oct. 13 telephone interview from Rome. “Those things are expensive!”
Becoming serious, Monsignor Cummings said he was honored by the conferral of the title, noting that although it is not “automatic,” priests who work in the Roman Curia or the Vatican’s diplomatic service generally receive the title after five years of service. Monsignor Cummings will be known as a “Chaplain to his Holiness,” and will wear a black cassock with purple buttons.
In 2014, the pope announced he would not name monsignors for priests under age 65 unless they work for certain ministries of the Holy See.
At the Congregation for Eastern Churches, Monsignor Cummings works mostly with the Syro-Malabar Catholic Church and the Syro-Malankara Church in India. He is responsible for administrative tasks related to church functions that need approval from the Holy See.
“The congregation does everything that the Eastern churches need the Holy Father’s approval for,” Monsignor Cummings explained. Those tasks could range from simply validating that a priest has permission to celebrate Mass in more than one ritual or they could be more complicated – approving the statutes of a new religious congregation or changes in the liturgy, for example.
Ordained in 1998 by Cardinal William H. Keeler, Monsignor Cummings served as associate pastor of St. John the Evangelist in Severna Park until 2002. From 2002 to 2007, he ministered in Russia, serving one year as the spiritual director at a seminary in St. Petersburg and the rest of the time assisting the archbishop of the Archdiocese of Mary Mother of God in Moscow and working in parishes. He lived with the Missionaries of Charity in Russia for four years.
“It was a challenge to learn Russian,” Monsignor Cummings remembered, “but it wasn’t as hard as you might think. Russian is actually a very logical language.”
Monsignor Cummings returned to Baltimore in 2009 after completing doctoral studies in moral theology in Rome. He served as associate pastor of Our Lady of Perpetual Help in Ellicott City and assisted at Mount St. Mary’s Seminary in Emmitsburg until 2011.
In addition to his administrative work in Rome, Monsignor Cummings has assisted at a local parish and the ancient monastery known as the Abbey of Sarsa. He also celebrates Masses for the Missionaries of Charity in the Eternal City.
The youngest of eight children who earned his bachelor’s degree in philosophy from Harvard University, Monsignor Cummings acknowledged that he never imagined his priesthood would take him to so many far-flung places.
“I’ve really been able to experience the universality of the church,” Monsignor Cummings said.
As for his new title, the priest is still getting accustomed to it.
“I still prefer to be called ‘Father McLean,’” he said.

As pastorates are developed, Archbishop Lori calls for ‘mission focus’