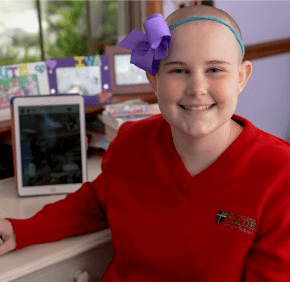 By Erik Zygmont
ezygmont@CatholicReview.org
Twitter @ReviewErik
Julie Sidlowski, a seventh-grader at Monsignor Slade Catholic School in Glen Burnie , describes her relationship with her friend and classmate Emily Kolenda : “We take her from class to class,” Sidlowski said. “Sometimes we pick her up, and sometimes we direct her: ‘OK Emily, turn right. Come forward.’”
All the while, Emily, also a seventh-grader, is actually studying from her bedroom at home. An iPad and speaker mounted on a wheeled base puts her virtually in the classrooms and hallways of Monsignor Slade.
“She’s always loved school,” said her mother, Kelly Kolenda. “She was the child who never wanted to miss school, never wanted to be sick.”
In January 2012, Emily was diagnosed with autoimmune demyelinating encephalomyelitis, a rare disease that causes lesions on the brain as well as headaches, cognitive difficulties and balance issues.
The treatment – monthly chemotherapy sessions – is brutal.
While the chemo should keep her out of commission for a week, that often stretches to 10 or even 14 days, Kelly Kolenda said.
“When she’s in the hospital for monthly treatments, she misses school,” she added, “but she also misses school for her weakened immune system. She might only attend school three or four days in month, if we’re lucky.”
That’s where the robot, designed by California-based Double Robotics, comes in.
Emily immediately giggles when she says its name: “W.O.A.W.O.A.” It’s the name Emily’s younger sister once bestowed on her, the pronunciation akin to adult speech in the Peanuts cartoons.
Her friends and teachers just refer to the robot as “Emily.”
A similar robot, also designed by Double Robotics, was being used in Montgomery County public schools, where Emily’s grandmother works.
“She called me right away and said, ‘We need to do this for Emily,’” her mother remembered.
She approached Alexa Cox, principal of Monsignor Slade, with the same message, in the form of a request followed by a short video on the technology.
“When I saw the film, I thought, ‘We can do this at Monsignor Slade,’” Cox remembered. “We like to try new things.”
“We needed the school’s support to make this work for Emily,” Kolenda said. “We have always been very happy with the decision to send our girls to Monsignor Slade. … It has made us very happy to have the school’s love and support through this.”
Faith, too, has sustained the family, parishioners of St. Mark in Catonsville.
“Our faith has allowed us to continue to fight,” Kolenda said.
Emily controls the robot with an app on her iPad at home. She has especially enjoyed her literature and religion classes.

Monsignor Slade Catholic School student Emily Kolenda responds to her science teacher, as she remotes into class via the Internet using an iPad robot system. Unable to attend class regularly due to a serious illness, the remote technology allows her to keep up with schoolwork from home. (Kevin J. Parks | CR Staff)

“I like learning about God and Jesus and the saints,” she said.
The wireless connection must be very strong for Emily to control the robot by remote control. Sometimes the signal is lost and nobody knows until Emily fails to respond to a question.
“You have to make sure you have your class controlled enough and flexible enough that you can stop and work on that,” said Laura Briggs, who taught Emily last year.
Briggs noted other limitations – it is difficult for Emily to see the board via the camera, and she can only observe, rather than participate in, science experiments.
“If I say page such-and-such, she’s right there with us,” Briggs said. “If she misses some of the lecture, she’s right on target when she comes back.”
The robot allows Emily to keep up socially with her classmates.
“I can text and message all my friends, but I don’t really get a connection (that way),” she said. “When I’m on the robot, I get to feel like I’m in school again.”
She’s not the only one who benefits.
“Everybody loves it when she’s there (through the robot),” said her friend and classmate Kori Edmondson. “They’re always talking to her and always saying hi to her in the halls. … She’s just so fun to have in class. She makes everybody happy and the spirit in the class just rises.”
Briggs got goosebumps as she described Emily’s participation the 2015 Christmas singalong, at which the robot avatar was placed among the other students.
“It was really neat,” Briggs remembered. “She (Emily) was able to participate, and listen.”
The singalong came just before half-day dismissal. As the students drifted out, they waved to Emily’s face in the iPad.
Watch a Catholic Review video report about Emily Kolenda here.
See also:
Ellicott City, Fullerton parish schools earn national Blue Ribbon award
Benefit for Catholic education raises spirits, $800,000
PrevNext