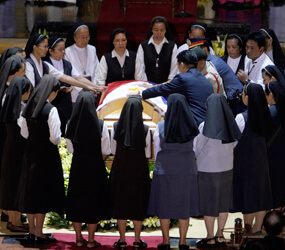 VATICAN CITY – Pope Benedict XVI expressed his sadness at the death of former Philippine President Corazon Aquino and praised her commitment to freedom and justice for Filipinos.

Aquino, 76, died Aug. 1 after a battle with colon cancer. Tens of thousands of Filipinos lined the streets Aug. 3 as her coffin made its way from San Juan City to Manila’s cathedral for a wake and an Aug. 5 funeral.

The pope, in a telegram to Cardinal Gaudencio Rosales of Manila, the Philippine capital, recalled Aquino as “a woman of deep and unwavering faith” who took on a crucial political role.

Pope Benedict praised Aquino’s “courageous commitment to the freedom of the Filipino people, her firm rejection of violence and intolerance, and her contribution to the rebuilding of a just and cohesive political order in her beloved homeland.”

Aquino was installed as president in 1986 after a church-led people’s uprising in Manila deposed President Ferdinand Marcos and paved the way for restoring the country’s democratic institutions. She served as the country’s first female president until stepping down in 1992.

Known familiarly as “Cory” to Filipinos, Aquino was thrust into politics following the airport assassination of her husband, Benigno Aquino Jr., on his return to the Philippines from U.S. exile in 1983. She assumed the leadership of a broad opposition movement that, with the support of military officers, eventually brought down the Marcos regime.

At an Aug. 3 Mass in San Juan City, where Aquino’s body lay for public viewing until it was moved to Manila, Bishop Florentino Cinense of Tarlac noted her reluctance to run in the 1986 snap election against Marcos.

“Her imperfections were never an excuse for her not to govern wisely,” he said in remarks reported by the Asian church news agency UCA News.

Citing her devotion to the rosary and Mary and her consultation of spiritual advisers during crises, the bishop said Aquino “showed us prayer cannot be the last recourse, but must be the first step.”

“In Aquino, we see that for a true Christian there can be no distinction between private and public life,” he said. “Let her life and virtues challenge us to strive to do even better.”

When she was presented the Path to Peace Award by a Vatican official in 1995, Aquino said she was accepting on behalf of her husband and all Filipinos, as well as herself. It was his assassination that “wakened the Filipino people from their apathy,” she said.

As president, Aquino won praise for establishing free elections and instituting a wide range of democratic reforms and institutions in the Philippines. But her term in office was also weighed down by problems, including repeated coup attempts, government scandals and natural disasters.

Her deep Catholic faith was evident in her frequent references to God in her speeches, and she often carried a rosary in her hands.

Aquino was born to an affluent family in the Philippines. The family moved to the United States after World War II, and Aquino attended several church-run schools, including Ravenhill Academy in Philadelphia and the Notre Dame Convent School in New York. She earned a degree in French from Mount St. Vincent College, a Sisters of Charity institution in New York.

Aquino later said her experience at Mount St. Vincent’s had taught her always to pray “Almighty Father, thy will be done.” She said it was this reliance on God that sustained her during the years of her husband’s imprisonment and assassination, and then of her presidency.

Even after her presidency ended, Aquino remained politically active. In recent years, she joined calls for the removal of President Gloria Macapagal-Arroyo over allegations of electoral fraud in the 2004 elections.