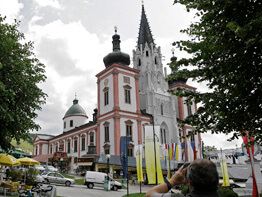 VATICAN CITY – Pope Benedict XVI makes his first papal visit to Austria in early September, a three-day mission to strengthen the faith and its public impact in one of Europe’s traditionally Catholic countries.

The visit Sept. 7-9 will focus on the 850th anniversary of the Marian sanctuary at Mariazell, which has long been a spiritual beacon for Central Europe.

In keeping with the theme of the visit, “Look to Christ,” the pope is expected to emphasize Mary’s role as a gateway to faith in Jesus and as a model of the church as mother.

The rest of the pope’s schedule is designed to spotlight the importance of the Christian faith in Austrian history, the church’s recent signs of parish vitality, and its presence in social debates and works of charity.

Among Austrian church leaders, the hope is that the papal visit will mark a new and positive chapter after a troubled period. Over the last 10 years the number of Austrian Catholics declined by 6 percent, partly as a result of a seminary sex scandal and a bishop’s resignation, as well as new tensions between lay Catholics and the hierarchy.

“After very difficult years, we are witnessing a new awareness and a more explicit sense of courage among Austrian Christians, who increasingly understand that our society needs the Gospel, faith and prayer,” Cardinal Schonborn said in a recent interview with the Vatican newspaper, L’Osservatore Romano.

“In this sense, Pope Benedict is coming to encourage us and to strengthen us in the faith,” the cardinal said.

The trip, the pope’s seventh foreign journey, will take him back to a country where he frequently visited and vacationed before his election in 2005. Cardinal Schonborn said Austrians sense that the German pope loves their country and they have shown a positive and growing interest in the substance of his visit.

After arriving in Vienna, the pope will begin his public program in the city’s historic Am Hof Square. In keeping with the Marian focus of the visit, he will pray before the baroque Column of Our Lady that stands in the center of the square.

Then the pope will go around the corner to stop at the Holocaust memorial in Vienna’s “Judenplatz,” or Jews Square, where he was expected to briefly greet Jewish leaders. Most of the country’s approximately 200,000 Jews left Austria after it was annexed by Nazi Germany in 1938, and many of those who remained were killed in Nazi death camps.

The highlight of the trip is the papal Mass in Mariazell Sept. 8, the feast marking the birth of Mary. Some 40,000 Catholics have reserved bus transportation to the liturgy, which will be celebrated in the square outside the shrine’s basilica.

Mariazell, nestled in an Austrian mountain valley, dates to 1157, when a Benedictine monk arrived to care for local Christians. He carried with him a wooden statue of Mary, which is preserved in the sanctuary’s chapel and venerated as miraculous by many of the faithful.

Mariazell is Austria’s most popular pilgrimage site, drawing about 1 million visitors each year. Especially during the era of European communism, the sanctuary was seen as a symbol of enduring faith by Christians throughout much of Central and Eastern Europe – a point the pope is expected to underline.
At the end of the Mariazell Mass, the pope will consign a “missionary mandate” to representatives of new parish councils. The gesture underscores what Cardinal Schonborn calls a “sign of life” for the church in Austria: new energy in Catholic parishes, as demonstrated by the strong role parishes have played in preparing for the papal visit.

In other encounters, the pope is expected to address problems and positive developments in the church. He presides over an evening prayer service Sept. 8 with priests and religious at Mariazell, an opportunity to reflect on the steep decline in vocations in Austria and the rest of Europe.

On Sept. 9, when the pope celebrates Sunday Mass in Vienna’s St. Stephen’s Cathedral, he may address the decline in weekly Mass attendance in Austria, which continues to worry pastoral leaders.

Throughout his stay, in public events and in closed-door meetings with the country’s political leaders, the pope will have a chance to speak about life-and-death issues like abortion and euthanasia.

The church in Austria runs programs for unwed mothers, as well as homes for the dying, and the pope is expected to highlight the importance of these and other church-sponsored social programs when he meets with Catholic volunteers on the last day of his visit.

Perhaps more than anything, the visit will allow Austrians to listen to a pope who, as Cardinal Schonborn said, measures his words carefully. The pope’s understated style probably means his trip will be short on verbal fireworks but rich in faith lessons, the cardinal said.

Essentially, he said, Pope Benedict is coming “to demonstrate how beautiful it is to follow Christ” and to encourage Christians to “live their faith in daily life.”

These two fundamental objectives are in perfect sync with the pope’s back-to-basics approach to his papal ministry. In the pope’s view, confronting secularization in Austria or elsewhere requires a double strategy: helping Catholics to reinforce their own faith and inviting them to make it count in society.