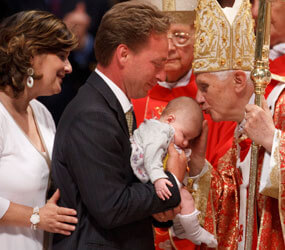 VATICAN CITY – Pope Benedict XVI entrusted the cause of world peace to the martyrs of World War II concentration camps, including a German priest executed for his hostility to the Nazi regime.

Speaking to pilgrims at his noon blessing June 12, the pope noted that the church was about to beatify Father Alois Andritzki, who died at the Nazi death camp of Dachau.

“Let us praise the Lord for this heroic witness of the faith, who joins the ranks of those who gave their lives in the name of Christ in the concentration camps. On this day of Pentecost, I would like to entrust to their intercession the cause of peace in the world,” the pope said.

“May the Holy Spirit inspire courageous efforts for peace and support the commitment to advance them, so that dialogue may prevail over arms and respect for human dignity may overcome special interests,” he said.

He prayed that God would “rectify hearts that have been twisted by selfishness” and help the human family to rediscover its fundamental unity.

Father Andritzki, the latest in a long line of Catholic martyrs under Nazism, was beatified June 13 in Dresden.

Ordained in 1939, Blessed Andritzki was engaged in youth ministry when he was interrogated by the Nazis for his theater productions’ “hostile statements” about the regime. He was arrested in 1941 for “treacherous acts” against the state and sent to Dachau, where he formed a Bible study group.

After more than a year in the camp, sick with typhoid, he asked a guard if he could receive Communion. Instead, they gave him a lethal injection. He died Feb. 3, 1943, at the age of 28. His sainthood cause was introduced in 1998 and Pope Benedict approved his martyrdom last December.

Earlier June 12, Pope Benedict celebrated Mass for the feast of Pentecost in St. Peter’s Basilica. In his homily, reflecting on the birth of the church, he said the church was holy “not thanks to the abilities of its members, but because God himself, with his Spirit, created it and sanctified it.”

If the church were merely an institution born of human initiative, he said, “it would have died out long ago, just as every human thing passes.”