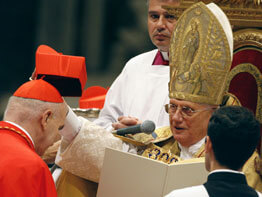 VATICAN CITY – In a liturgy that emphasized the church’s cultural diversity and its unity of mission, Pope Benedict XVI created 23 new cardinals from 14 countries.

The pope, presiding over his second consistory, told the new cardinals he had chosen them to be the “closest advisers and collaborators” of his ministry in Rome, the church’s traditional center.

At the same time, he said, the cardinals’ geographical variety reflects Catholicism’s global expansion and the fact that today the church “speaks every language of the world.”

International groups of pilgrims who packed St. Peter’s Basilica for the Nov. 24 consistory added emphasis to the pope’s words, applauding, cheering, ululating and even waving national flags when the new cardinals’ names were announced.

The pope made a special appeal for peace in Iraq and said his naming of Cardinal Emmanuel-Karim Delly of Baghdad, the Chaldean patriarch, was a sign of his closeness to the country’s Christian population.

“They are experiencing in their own flesh the dramatic consequences of an enduring conflict and now live in a fragile and delicate political situation,” the pope said.

“Together we want to reaffirm the solidarity of the entire church with the Christians of that beloved land and ask prayers for the beginning of the hoped-for reconciliation for all the peoples involved,” he said.

During the consistory, each cardinal knelt as the pope placed on his head a red three-cornered hat, called a biretta. The pope told them the color was not only a sign of the cardinal’s dignity, but also a visible reminder of their readiness to act with courage “even to the point of shedding your blood” in order to help spread the Christian faith.

Pope Benedict, wearing a gold cape and seated on a gilded throne, smiled as he watched the cardinals adjust their hats and receive the congratulations of the veteran cardinals, who filled the front of the basilica.