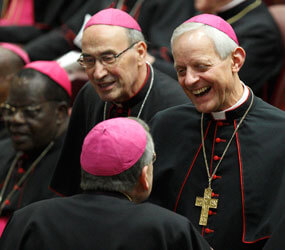 VATICAN CITY – Pope Benedict XVI and close to 150 top prelates – members of the College of Cardinals and the 24 churchmen who were about to join their ranks – met for a day of prayer and reflection on topics ranging from religious freedom to the clerical sex abuse crisis.

After a morning prayer service Nov. 19, the pope introduced the first two themes for discussion: religious freedom and the importance of the liturgy.

“He recalled that in the Lord’s mandate to proclaim the Gospel, the need for freedom to do so is implicit, and yet in history this encounters various forms of opposition,” said a statement issued by the Vatican press office.

Reporters were permitted inside the hall for the opening prayer, but the rest of the meeting was closed. The Vatican did not release the text or summaries of speeches.

Jesuit Father Federico Lombardi, Vatican spokesman, said the day was “not an occasion for decision-making or votes, but for prayer and reflection, sharing useful information and listening to the cardinals’ opinions.”

Cardinal Tarcisio Bertone, Vatican secretary of state, gave the presentation on religious freedom and the challenge of new limits being placed on the exercise of faith in the modern world.

“These are nations that often owe to Christianity the deepest aspects of their identity and culture, but one notes today a process of secularization with attempts to marginalize spiritual values from social life,” the Vatican statement said.

One cardinal participating in the meeting said that during the discussion period, Cardinal Francis E. George of Chicago was one of the prelates who spoke about how secularism is reducing religious freedom in his country.

Another participant, Cardinal-designate Donald W. Wuerl of Washington, told reporters that while the illicit ordination of bishops in China was mentioned during the discussion on religious freedom, it was not a major focus.

He said a significant point was “the concern for the erosion of religious liberty in our own country, the encroachment on the free expression of freedom of conscience in our own institutions. Actually, I was surprised that there were so many who spoke to that.”

Regarding the United States, he said there is a growing concern that “religious freedom seems to be being interpreted as freedom to worship in your house of worship, as opposed to the free exercise of religious opinion and the freedom of conscience, particularly for our institutions.”

He said Catholic institutions increasingly face government regulations that make them choose between violating Catholic teaching or closing down.

The cardinal-designate did not mention specifics, but, for example, Catholic agencies in at least two cities and states have had to stop offering adoption services when local governments insisted that same-sex couples be allowed to adopt.

Cardinal-designate Wuerl said he was not among the 18 cardinals who had an opportunity to address the morning session, adding, “Remember, I don’t have seniority.”

Cardinal Antonio Canizares Llovera, prefect of the Congregation for Divine Worship and the Sacraments, gave the morning’s second presentation, looking at liturgy in the life of the church.

In his introductory remarks, Pope Benedict told the cardinals that the liturgy is essential to the church’s life “because it is the place of God’s presence with us; therefore, it is the place in which the truth lives with us,” the Vatican statement said.

The morning session ended at 1 p.m. when Pope Benedict joined all the cardinals and cardinals-designate for lunch in the atrium of the Paul VI audience hall.

The day of prayer and reflection was scheduled to continue in the evening with presentations on the 10th anniversary of “Dominus Iesus,” a document of the Congregation for the Doctrine of the Faith reaffirming church teaching that salvation comes only through Jesus; the church’s response to the clerical sex abuse crisis; and the implementation of Pope Benedict’s norms for welcoming Anglicans into full communion with the Catholic Church.