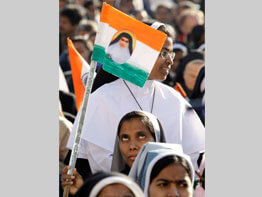 After the two-hour liturgy in St. Peter’s Square Oct. 12, the pope made a pointed appeal for an end to violence against India’s Christian minority.

He spoke after declaring sainthood for St. Alphonsa Muttathupandathu, a nun from southwestern India who was known for her holiness during a lifetime of suffering. The other new saints included an Italian priest, a Swiss missionary sister and an Ecuadorean laywoman.

The pope said their lives of faith and sacrifice should inspire contemporary Christians in all walks of life. As he pronounced the canonization decree, enthusiastic pilgrims waved flags and held up pictures of the new saints.

The liturgy marked a special moment for Indian Catholics. Thousands of Indian pilgrims, including many nuns and priests, applauded and cheered as the brief biography of St. Alphonsa was read aloud. An Indian government delegation also was present.

After the liturgy, the pope called for an end to violence against Indian Christians, in the wake of attacks on church personnel and institutions.

“As the Christian faithful of India give thanks to God for their first native daughter to be presented for public veneration, I wish to assure them of my prayers during this difficult time,” he said.

“Commending to the providential care of almighty God those who strive for peace and reconciliation, I urge the perpetrators of violence to renounce these acts and join with their brothers and sisters to work together in building a civilization of love,” he said.

Since August, anti-Christian violence by Hindu mobs in the Indian state of Orissa has left about 60 people dead, hundreds injured and thousands displaced. The Indian government met in early October to discuss the growing problem.

The pope, dressed in gold vestments on a cloudless Sunday morning, spoke in his homily about St. Alphonsa’s life of extreme physical and spiritual suffering before her death.

“This exceptional woman, who today is offered to the people of India as their first canonized saint, was convinced that her cross was the very means of reaching the heavenly banquet prepared for her by the Father,” the pope said.

“She wrote, ‘I consider a day without suffering as a day lost.’ May we imitate her in shouldering our own crosses so as to join her one day in paradise,” he said.

St. Alphonsa was born in 1910, and at a young age was determined to become a nun after reading the lives of the saints. When a marriage was arranged for her at the age of 14, she deliberately burned her foot so that her disfigurement would allow her to avoid the engagement.

She joined the Franciscan Clarist Congregation at age 17 and taught for a while, but was soon confined to her convent because of a succession of illnesses, including typhoid fever, pneumonia, skin infections and a wasting disease.

At the same time, her life also was marked by periods of great spiritual joy. As for her distress, she said she was convinced that God had destined her to be a “sacrifice of suffering.” She died peacefully and happily in 1946.

The others canonized were:

– St. Narcisa de Jesus Martillo Moran, a 19th-century Ecuadorian known for her deep prayer and penitence. At a young age, she made private vows of virginity, poverty, obedience and self-mortification.

She remained a laywoman, serving as a catechist while working as a seamstress. According to a Vatican biography, her penitential mortifications were severe, and when she died at age 37 in 1869, doctors said they were amazed she lived so long on so little food.

– St. Gaetano Errico, an Italian priest who founded the Congregation of Missionaries of the Sacred Hearts of Jesus and Mary in the 19th century. He was known for the many hours he spent in the confessional, and for seeking out the sick, the abandoned and the spiritually afflicted in his native area of Naples. He died in 1860 at the age of 69.

As a young woman, she broke off a marriage engagement and intended to live as a contemplative sister. But she was convinced instead to embark on a missionary journey to Ecuador, where she formed her new order, which worked especially among native families.

She told her sisters to open their houses to the poor, and to give them preference over all their other activities. A violent persecution caused her to flee with her community to Colombia, where she died in 1924.

With these canonizations, Pope Benedict has created 18 new saints in his pontificate of three and a half years. His predecessor, Pope John Paul II, presided over the canonization of more than 450 new saints.