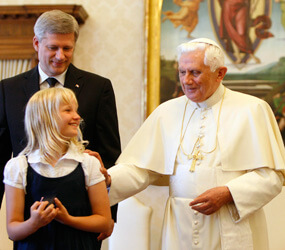 VATICAN CITY – When Pope Benedict XVI and Canadian Prime Minister Stephen Harper met at the Vatican July 11, their discussions included protecting human life and the traditional family in Canada as well as development and peace abroad.

The pope and prime minister spent 20 minutes speaking alone in French before Harper introduced his wife, Laureen, and their son Benjamin, 11, and daughter Rachel, 7.

The Vatican said that in addition to discussing international issues the pope and prime minister discussed issues in Canadian society, particularly regarding “ethical values, the defense and promotion of life, marriage and the family.”

After the meeting, Harper said, “It was an honor to meet Pope Benedict and hear his perspective on a number of important issues, including human rights and an ethical response to the global economic crisis.”

The prime minister said he had expressed “deep appreciation for the Holy Father’s moral and humanitarian leadership as an advocate of human dignity, peace and religious liberty, and for the spiritual leadership he provides to Catholics in Canada and throughout the world.”

The Vatican said that in Harper’s meeting with Pope Benedict and in a separate meeting with Cardinal Tarcisio Bertone, the Vatican secretary of state, the conversations included a discussion of the results of the July 8-10 summit of the Group of Eight, the world’s major industrialized nations. Canada is a G-8 member, so Harper had attended the summit in L’Aquila, Italy.

“The friendly conversation focused on several issues of international politics discussed at the G-8 and on the results of the summit,” including a look at its decisions in light of Pope Benedict’s new encyclical, “Caritas in Veritate” (“Charity in Truth”), the Vatican statement said.

The encyclical, released July 7, urged individuals and governments to recognize the ethical implications of economic activity, called for greater aid to poor countries and insisted that human life must be protected in development programs.

The discussions about the G-8, the Vatican said, looked particularly at “the economic and financial crisis and its ethical implications, aid to developing countries, especially Africa, climatic changes, disarmament and nuclear proliferation.”

The pope and prime minister also spoke about the prospects for peace in the Middle East and the status of respect for “religious freedom in several countries,” the Vatican said.

As he was leaving the meeting, Harper told reporters, “I think the meeting went very well.”

In addition to giving Harper a leather-bound copy of his encyclical – as he did with other world leaders he met during the week – the pope also gave the prime minister a limited-edition pen shaped like one of the columns of Gian Lorenzo Bernini’s canopy over the main altar in St. Peter’s Basilica.

Harper toured the basilica after meeting the pope and Cardinal Bertone.