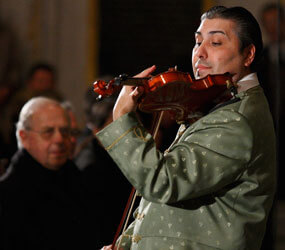 Speaking in French to pilgrims gathered in the courtyard of the papal residence at Castel Gandolfo Aug. 22, the pope said the day’s Scriptures were “an invitation to learn how to accept legitimate differences among human beings, just like Jesus came to unite men and women from every nation and every language.”

After praying the Angelus, he urged families to teach tolerance.

“Dear parents, may you be able to educate your children about universal fraternity,” he said in French.

The pope’s invitation came amid a government-led campaign to expel foreign-born Roma, or Gypsies, from France and dismantle illegal camps.

About 80 Romanian-born Gypsies were flown back to Romania Aug. 19, bringing the number of Gypsies expelled from France in August to about 200 people. More flights were scheduled for the rest of August and September, according to Romania’s Foreign Ministry.

The expulsions were part of a voluntary repatriation program in which the government paid each adult about $380 and each child about $130 to return to his or her country of origin, even though the Gypsies are members of the European Union. In 2007, Romania joined the European Union, which guarantees that citizens of member states enjoy freedom of movement.

The French government, however, demands that the Gypsies have work permits and prove they are able to support themselves.

Some human rights groups questioned the voluntary nature of the program since those who do not chose to return now will face a government order to leave the country with no monetary compensation.

The expulsions have been occurring for a number of years; in 2009, more than 10,000 foreign-born Gypsies were deported, according to the France-based advocacy group Romeurope.

France’s Interior Ministry stressed that the country was enforcing current rules against occupying land with no authorization.

Archbishop Agostino Marchetto, secretary of the Pontifical Council for Migrants and Travelers, criticized the dismantling of some 51 illegal Gypsy camps in early August, which pushed residents into “a precarious situation” that certainly impacted their decision to accept the monetary aid connected to their deportation.

“The ‘Gypsy Question’ is a serious issue for Europe because it involves the largest minority group in Europe: at least 12 million people, including 5 million children who must go to school,” he said in an interview with Vatican Radio Aug. 20.

The archbishop said the European Union forbids collective expulsions and that the European Commission was studying the situation.

EU rules state “there can be no expulsions if there is no serious danger to security,” he said.

French law also obligates towns with more than 5,000 inhabitants to create special areas that are available to itinerant peoples, like Gypsies, he said.

“Therefore France itself is found to not have been following a law that was created precisely to protect these people” and to prevent the building of camps illegally, he said.

According to Amnesty International, about 20,000 Gypsies from Eastern and Central Europe are estimated to be residing in France, many of them in illegal camps.

However, in a July 23 statement, Amnesty reminded French authorities that international law mandates that evictions, even from illegal settlements, should only take place after all other alternatives have been exhausted, affected residents have been consulted, and adequate alternative accommodation has been offered.