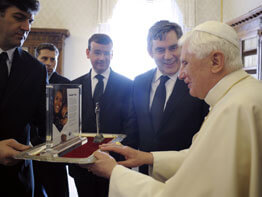 The pope and prime minister met Feb. 19 at the Vatican and their 35-minute private conversation included the economic crisis and “the duty to pursue initiatives benefiting the less developed countries,” a Vatican statement said.

Pope Benedict and Prime Minister Brown also agreed that efforts must be made “to foster cooperation on projects of human promotion, respect for the environment and sustainable development,” the statement said.

The Vatican also said the two leaders expressed hope “for a renewed commitment on the part of the international community in settling ongoing conflicts, particularly in the Middle East.”

Prime Minister Brown said that by the time the pope makes his planned visit to the Holy Land in May, Israel should have a new government “and it may be a chance for us to see the peace process moving forward earlier than people expect.”

Prime Minister Brown said his meeting with the pope focused heavily on the world’s economic troubles.

“Large numbers of people have been thrust into poverty as a result of the banking crisis and I think that we, together with the faith groups, must have uppermost in our minds … what we can do immediately to help those in difficulty,” he said.

“The reality of what has happened has got to lead to us taking action to create safety nets for people in countries where they are most vulnerable to the downturn,” Prime Minister Brown said. “We cannot walk by on the other side (of the street) as people face hardship as a result of global banking crisis. There are 100 million people who have been pushed into poverty.”

Prime Minister Brown said that he and the pope spoke about “the importance of what we might call ‘the simple virtues’ being at the center not just of family life in our societies and communities, but also at the center of our economic life.”

“The only successful economic life in the future will be one that values hard work and effort and responsibility and enterprise, but chooses not to reward irresponsible risk-taking and excess,” he said.

Prime Minister Brown said the crisis shows how wrongheaded were the people who thought a healthy society could be built by promoting moral values in people’s private lives, while saying “the economy should be left just to run as … values-free markets.”

Brown also said he and the pope spoke of the importance of maintaining the world’s commitment to the Millennium Development Goals, a U.N.-adopted initiative to halve poverty and its effects by the year 2015.

Especially when looking at the goals to get more of the world’s children into school, to keep poor children from starving and to provide them and their parents with basic health care, the contribution of the Catholic Church is huge, he said.

On the eve of Prime Minister Brown’s visit, the Vatican newspaper published an editorial by the prime minister about the global economic crisis and the obligation of the world’s richest countries to find solutions that include significant assistance for the world’s developing nations.

The newspaper, L’Osservatore Romano, printed the prime minister’s article on its front page.

While millions of people in wealthy countries face the loss of their jobs, Prime Minister Brown wrote, in Africa and many parts of Asia “this economic crisis will mean that millions more go hungry and that education and health services will be cut back.”