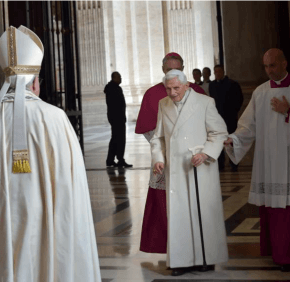 VATICAN CITY  – Although he lives a relatively hidden life in a villa in the Vatican Gardens, retired Pope Benedict XVI continues to study modern theological questions and, occasionally, to comment on them publicly.
The attention Pope Francis and many Christians are giving to the theme of divine mercy is a “sign of the times” that shows how, deep down, people still experience a need for God, the retired pope told Belgian Jesuit Father Jacques Servais in a written interview.
“Mercy is what moves us toward God, while justice makes us tremble in his sight,” Pope Benedict said in the interview published in mid-March.
Archbishop Georg Ganswein, the retired pope’s personal secretary, read Pope Benedict’s German text in October at a conference on the doctrine of justification and the experience of God. The retired pope approved the Italian translation of the text, which was published along with other papers presented at the conference.
The doctrine of justification – how people are made righteous in God’s eyes and saved by Jesus – was at the heart of the Protestant Reformation, which will mark its 500th anniversary in 2017.
In the interview, Pope Benedict said, “For people today, unlike at the time of (Martin) Luther and from the classical perspective of the Christian faith, things have been turned upside down in a certain sense: Man no longer thinks he needs to be justified in God’s sight, but rather he is of the opinion that it is God who must justify himself because of all the horrendous things present in the world and in the face of human misery.”
The extreme synthesis of such an impression, he said, could be formulated as: “Christ did not suffer for the sins of men, but in order to cancel the faults of God.”
“Even if today the majority of Christians would not share such a drastic overturning of our faith, you could say that it indicates a basic tendency,” the retired pope said.
Another sign of a strong change in general thinking that challenges at least medieval Christian thought, he said, is “the sensation that God cannot simply allow the perdition of the majority of humanity.”
Yet, Pope Benedict said, there still exists a general perception that “we need grace and pardon. For me it is one of the ‘signs of the times’ that the idea of God’s mercy is becoming increasingly central and dominant” in Christian thought.
St. Faustina Kowalska’s promotion of the divine mercy devotions in the early 1900s and the ministry and writings of St. John Paul II, “even if it did not always emerge in an explicit way,” both gave a strong push to a popular Christian focus on mercy and to theological explorations of the theme.
From his experience as a youth during World War II and his ministry under communism in Poland, St. John Paul “affirmed that mercy is the only true and ultimately effective reaction against the power of evil. Only where there is mercy does cruelty end, only there do evil and violence stop,” said the retired pope, who worked closely with the Polish pope for decades.
“Pope Francis,” he said, “is in complete agreement with this line. His pastoral practice is expressed precisely in the fact that he speaks continuously of God’s mercy.”
The fact that so many people are open to that message, Pope Benedict said, shows that “under the patina of self-assurance” and a conviction of self-righteousness, “man today hides a deep awareness of his wounds and his lack of worthiness before God. He is waiting for mercy.”
In many ways, he said, the focus on divine mercy is a modern way of speaking about “justification by faith,” knowing how important God’s mercy is.
The role explicit faith in Jesus plays in one’s salvation is an area where “we are before a profound evolution of dogma,” Pope Benedict said. “In the second half of the last century an awareness that God cannot allow the perdition of all the nonbaptized was completely affirmed.”
“If it is true that the great missionaries of the 16th century were convinced that one who was not baptized was lost – and that explains their missionary commitment – in the Catholic Church after the Second Vatican Council that conviction was definitely abandoned,” he said.
Theologians are still trying to work out full and valid explanations that would affirm the Christian certainty that salvation comes through Christ without insisting baptism and an explicit profession of faith in him is needed, the retired pope said. In the meantime, though, it is clear that the church – the entire Christian community – is the body of Christ and that body must reach out to offer help, healing and an invitation to a deeper relationship with God.
“The counterbalance to the dominion of evil can consist only in the divine-human love of Jesus Christ that is always greater than any possible power of evil,” Pope Benedict said. “But we must insert ourselves into this response that God gives through Jesus Christ.
“Even if the individual is responsible only for a fragment of evil,” he said, he or she is therefore “an accomplice in its power.”
Like Pope Francis, Pope Benedict urged a return to the sacrament of reconciliation. That is where, he said, “we let ourselves be molded and transformed by Christ and continually pass from the side of one who destroys to that of the one who saves.”