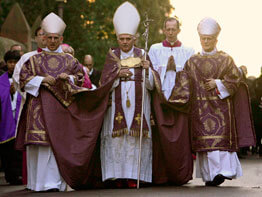 VATICAN CITY – Inadvertently or not, Pope Benedict XVI allowed reporters to get a taste of a Lenten experience he recommended to the priests of the Diocese of Rome, “fasting from words and images.”

Pastors of Rome parishes and other representatives of the city’s clergy have one opportunity a year to meet their bishop – the pope – as a group and to ask him questions.

While reporters are not allowed into the annual Lenten meeting, the Vatican practice has been to pipe a slightly delayed audio broadcast of the meeting into the Vatican press office.

This year, however, “the Holy Father wanted the priests to feel tranquil and free” to ask the pope whatever was on their minds, said Passionist Father Ciro Benedettini, vice director of the press office.

The papal decision meant the journalists got no audio from the Feb. 7 meeting. However, Vatican Radio provided some brief snippets, the Vatican newspaper published a summary, and a transcript of the gathering was published the following day.

Pope Benedict said fasting from words and images is needed just as much as fasting from food and abstaining from meat.

“We need a little bit of silence,” he said. “We need a space without the constant bombardment of images” in order “to fill our hearts with the true image and the true word.”

The meeting with the pope lasted 100 minutes and gave 10 priests an opportunity to ask the pope a question and receive a response.

According to the communications office of the Diocese of Rome, the pope is not given the questions in advance, although it is clear that some of the priests spent a considerable time honing their queries before they got to the Vatican.

At the same time, some of the priests gave rambling half-speeches or posed questions so broad that the pope said that to do one of them justice he would have needed “at least a semester of theology to respond.”

While the 10 questions ran the gamut from youth ministry to proclaiming the Gospel in an increasingly multireligious city, Lent obviously was on the pope’s mind.

Pope Benedict said that in addition to fasting he thought Catholic pastors and teachers and, therefore, Catholics in general spent too little time contemplating the four final realities: death, judgment, hell and heaven.

He told the priests that is one reason why he spoke about the Last Judgment in his encyclical on hope, “Spe Salvi.”

In the encyclical he wrote, “From the earliest times, the prospect of the judgment has influenced Christians in their daily living as a criterion by which to order their present life, as a summons to their conscience, and at the same time as hope in God’s justice.”

He told the priests that if Christians lose sight of the reality of a final judgment, they lose sight of their need for redemption. And, he said, someone who is not focused on making it to heaven in the next life will not be focused on carrying out acts of charity, justice and solidarity in this life.

The communists of Eastern Europe tried to do away with religion, accusing it of being focused only on the world to come, Pope Benedict said. They promised to build a utopia on earth, but they ended up destroying souls and inflicting huge damage on the environment at the same time.

Healing the earth, “respecting the cry of this planet, can happen only by finding God again, only with eyes open to God,” he said.

In addition to proclaiming salvation in Jesus, the pope said, “we must speak also and specifically about sin as the possibility of destroying oneself and other parts of the earth as well.”

Most of the priests’ questions were based on their personal experiences as pastoral workers. For one, traveling with young parishioners to an Italian youth rally with Pope Benedict last September was disappointing to say the least.

Father Alberto Orlando said there was “a certain distance between you and the young people,” who could not see the papal stage or hear the pope most of the time. The Sunday Mass under the hot September sun “was heavy going, especially because of the songs and music,” which he thought were too solemn and slow for the occasion.

Pope Benedict explained that he did not plan the event, arrange the seating or choose the hymns: “I found everything the way it was, so I do not know if it would have been possible to organize it differently.”

The pope said he rode in the popemobile through the crowd precisely to get close to as many of the young people as possible, but he said he still sees dozens of unresolved problems with celebrating a Mass with hundreds of concelebrants and thousands of the faithful.

And, he said, he does not have all the answers.