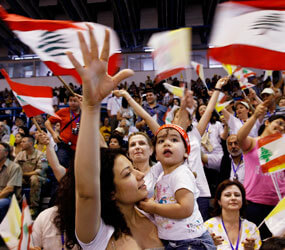 NICOSIA, Cyprus – The Catholic minority in Cyprus and the Christian minority in the Middle East are called to be witnesses of God’s love, of hope in the face of suffering and of a tenacious commitment to dialogue for peace, Pope Benedict XVI said.

Meeting with members of Cyprus’ tiny Catholic communities in the morning June 5, celebrating Mass that evening with church workers and celebrating Mass June 6 in a sports stadium, the pope said they can be a force for good in the region and in the world by strengthening their bonds of affection for one another, building unity with other Christians and respectfully working with followers of other religions.

“We are called to overcome our differences, to bring peace and reconciliation where there is conflict, to offer the world a message of hope,” the pope said in his homily June 6 in Nicosia’s Eleftheria sports arena.

“We are called to reach out to those in need, generously sharing our earthly goods with those less fortunate than ourselves. And we are called to proclaim unceasingly the death and resurrection of the Lord,” the pope told an estimated 10,000 people from Cyprus and throughout the Middle East.

The Vatican estimates there are about 25,000 Catholics in Cyprus. Most belong to the Maronite Church; the Latin-rite Catholic community is composed of a tiny group of Cypriot Catholics and several thousand foreign workers, particularly from the Philippines, Sri Lanka and India.

The pope’s meeting June 5 with Catholics at the St. Maron School brought together representatives from all the Catholic communities, including Filipino, Sri Lankan and Indian domestic workers who had the day off.

One of them, Violet Saldanha, 45, was singing in the choir. Coming from Mumbai, India, she has been working as a housekeeper in Cyprus for 10 years and said the church nourishes her faith, gives her support and is a place to socialize.

The Latin-rite choir was just a tiny part of the program put on for the pope; hundreds of children from 4-year-olds to teenagers danced for the pope and a Maronite choir sang traditional hymns as well as mournful folk songs.

The sad songs reflect the fact that many of Cyprus’ Maronite villages were on the northern part of the island, which has been under the control of Turkish Cypriots since 1974. Thousands of troops from Turkey are stationed in the North.

Elena Solo is from one of the northern villages, Ayia Marina.

While Greek Cypriots and Turkish Cypriots cross over the U.N.-patrolled buffer zone with relative ease, Ayia Marina and some other villages are off limits.

“We are not allowed to go inside the village, not even to visit the church. There are Turkish troops there,” Solo said.

Still, she said, the situation is the result of a political problem between Cyprus and Turkey, not a religious problem, and it does not prevent Greek and Turkish Cypriots from working together and even being friends.

In his introductory remarks, Pope Benedict greeted the Maronite Catholics, giving special mention to Ayia Marina and three other villages once inhabited by the Maronites who fled south after the 1974 tensions.

Maronite Archbishop Youssef Soueif of Cyprus asked the pope, “Help us return to our villages. Remember Cyprus in your prayers. Our villages are beautiful spaces where we preserve our identity, our particularity in the spirit of openness toward everyone.”

Openness was a key theme in the pope’s address to about 2,000 people gathered in the hot sun on the schoolyard.

The pope said the fact that Catholics were such a small minority on the island gave them the opportunity each day to foster good relations with other Christians and with Muslims.

“Only by patient work can mutual trust be built, the burden of history overcome, and the political and cultural differences between peoples become a motive to work for deeper understanding,” he said.

The pope urged the Catholics of Cyprus “to help create such mutual trust between Christians and non-Christians as a basis for building lasting peace and harmony between peoples of different religions, political regions and cultural backgrounds.”

After the event at the school, the pope was the guest of Orthodox Archbishop Chrysostomos II, head of the Orthodox Church of Cyprus. Before visiting the Orthodox museum and joining the archbishop for lunch, the pope praised the Cypriot leader for his role in supporting dialogue and peaceful coexistence.

The pope told the archbishop that he joined him “in praying that all the inhabitants of Cyprus, with God’s help, will find the wisdom and strength needed to work together for a just settlement of issues remaining to be resolved, to strive for peace and reconciliation, and to build for future generations a society distinguished by respect for the rights of all.”

At the evening Mass June 5 with priests, nuns, seminarians and parish leaders at the Church of the Holy Cross, the pope focused on the theme of the cross and of suffering transformed by love.

The cross, he said, “is indeed an instrument of torture, suffering and defeat, but at the same time it expresses the complete transformation, the definitive reversal of these evils; that is what makes it the most eloquent symbol of hope that the world has ever seen.”

The cross “speaks of love, it speaks of the victory of nonviolence over oppression,” he said.

On the eve of presenting the working document for the special Synod of Bishops for the Middle East, Pope Benedict said he wanted to remember the many priests and religious in the Middle East “currently experiencing a particular call to conform their lives to the mystery of Christ’s cross.”

Many Christian families are leaving the region because of the violence and tensions there, and sometimes priests and religious are tempted to do likewise, he said.

“Their presence alone is an eloquent expression of the Gospel of peace” and of the church’s ongoing commitment to dialogue, the pope said.