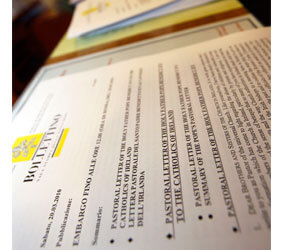 VATICAN CITY – In a letter to Irish Catholics, Pope Benedict XVI personally apologized to victims of priestly sexual abuse and announced new steps to heal the wounds of the scandal, including a Vatican investigation and a year of penitential reparation.

“You have suffered grievously and I am truly sorry. I know that nothing can undo the wrong you have endured. Your trust has been betrayed and your dignity has been violated,” he told victims in his letter, released March 20 at the Vatican.

The pope told priest abusers that they would answer to God for their sins. He said bishops had made serious mistakes in responding to allegations of sexual abuse, and he encouraged them to implement new church norms against abuse and cooperate with civil authorities in such cases.

“Only decisive action carried out with complete honesty and transparency will restore the respect and good will of the Irish people toward the church,” he said.

The 4,600-word letter was to be distributed at Masses across Ireland March 20-21, and priests there were preparing homilies on the text. The letter came in response to the disclosure last fall that Irish church leaders had often protected abusive priests over the last 35 years. Similar allegations have since come to light in Germany, the Netherlands, Austria and Switzerland.

Pope Benedict, who met with Irish bishops to discuss the problem in February, began his letter by saying he shared in the sense of betrayal Irish Catholics felt when they learned of these “sinful and criminal acts” and the “often inadequate response” by church authorities in Ireland.

He said he was convinced that the church, having adopted strict new measures against sexual abuse, was now on the right path. But the healing process for Irish Catholics will take time and requires a deeper spiritual renewal, he said.

“No one imagines that this painful situation will be resolved swiftly,” he wrote.

The pope pointed out that he had met with sex abuse victims before and said he was ready to do so again. Many in Ireland have called for a papal meeting with those who suffered abuse at the hands of priests.

To the victims of abuse and their families, the pope offered sympathy and understanding.

He noted that many victims found that, when they had the courage to denounce the abuse, “no one would listen.” Those abused in Catholic residential institutions must have felt that there was no escape from their sufferings, he said.

“It is understandable that you find it hard to forgive or be reconciled with the church. In her name, I openly express the shame and remorse that we all feel. At the same time, I ask you not to lose hope,” he said.

Addressing priests and religious who have abused children, the pope declared: “You betrayed the trust that was placed in you by innocent young people and their parents, and you must answer for it before almighty God and before properly constituted tribunals.”

Priest abusers, he said, have “violated the sanctity of the sacrament of Holy Orders in which Christ makes himself present in us and in our actions.” He said those who have abused should openly acknowledge their guilt, try to atone personally for what they have done and “do not despair of God’s mercy.”

The pope urged bishops to fully implement the church’s new policies against abuse and to “continue to cooperate with the civil authorities in their area of competence.”

“It cannot be denied that some of you and your predecessors failed, at times grievously, to apply the long-established norms of canon law to the crime of child abuse. Serious mistakes were made in responding to allegations,” he said.

The pope said he had ordered an apostolic visitation, or internal church investigation, of certain dioceses in Ireland, as well as seminaries and religious congregations. He said details would be announced later.

The step was an apparent effort to find out more precisely how and why mistakes were made in the handling of abuse cases.

The pope identified several contributing factors to clerical sex abuse, among them a “misplaced concern for the reputation of the church” that led to a failure to apply existing penalties against abuse. He also pointed to inadequate selection of priesthood candidates, poor formation programs and a tendency in society to favor the clergy and other authority figures.

At the same time, he said priestly sexual abuse was linked to more general developments, including the secularization of Irish society and of Irish clergy and religious themselves, and misinterpretation of the Second Vatican Council.

In addition to the apostolic visitation, the pope announced two other “concrete initiatives” to help Irish bishops repair the damage in the church:

– A yearlong period, from Easter 2010 to Easter 2011, of penitential and devotional practices with the intention of strengthening holiness and strength in the church in Ireland.

In particular, he said, eucharistic adoration should be set up in every diocese, so that “through intense prayer before the real presence of the Lord, you can make reparation for the sins of abuse that have done so much harm,” he said.

– A nationwide “mission” to be held for all bishops, priests and religious, to promote a better understanding of their vocations by drawing on the expertise of preachers and retreat-givers, and by studying Vatican II documents and more recent teachings.

The pope cited Ireland’s immense past contributions to the church, and the great sacrifices made by Irish Catholics. That sense of faith needs to be renewed, even in the face of the recent scandals, he said.

Addressing young people in Ireland, he urged them not to give up on the church.

“We are all scandalized by the sins and failures of some of the church’s members,” he said.

“But it is in the church that you will find Jesus Christ, who is the same yesterday, today and forever,” he said.

The pope told Irish Catholics he was sending his letter “with the care of a father for his children and with the affection of a fellow Christian, scandalized and hurt by what has occurred in our beloved church.”

He closed the letter with a prayer that said: “May our sorrow and tears, our sincere efforts to redress past wrongs, and our firm purpose of amendment bear an abundant harvest of grace.”

The full text of the papal letter is available on the Vatican Web site at http://www.vatican.va/holy_father/benedict_xvi/letters/2010/documents/hf_ben-xvi_let_20100319_church-ireland_en.html