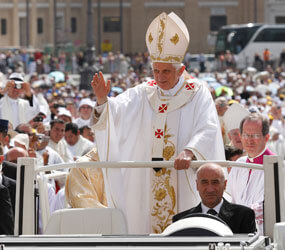 VATICAN CITY – Pope Benedict XVI said the Year for Priests might have been ruined by the clerical sex abuse scandal, but instead became a “summons to purification” in the church.

Concelebrating Mass June 11 with some 15,000 priests, the pope said that “the enemy,” Satan, wants to drive God out of the world and opposes those who work to ensure that God is at the side of every man and woman, especially in times of trouble.

“And so it happened that, in this very year of joy for the sacrament of the priesthood, the sins of priests came to light – particularly the abuse of the little ones, in which the priesthood, whose task is to manifest God’s concern for our good, turns into its very opposite,” the pope said in his homily at the Mass concluding the Year for Priests.

The priests, 80 cardinals and 350 bishops and archbishops, who were sitting under the hot sun in St. Peter’s Square, signaled their agreement with the pope’s statement by applauding.

The Vatican said that with so many priests vested for Mass and reciting together the key words of the eucharistic prayer with their hands extended toward the altar, the liturgy marked the largest concelebration ever held at the Vatican.

Addressing the abuse scandal in his homily, Pope Benedict said the Catholic Church begs forgiveness from God and “from the persons involved, while promising to do everything possible to ensure that such abuse will never occur again.”

In admitting men to the seminary and priesthood, he said, “we will do everything we can to weigh the authenticity of their vocation and make every effort to accompany priests along their journey, so that the Lord will protect them and watch over them in troubled situations and amid life’s dangers.”

The priests and bishops, who turned St. Peter’s Square into a sea of white albs and stoles, were well aware of the scandal and of the shadow of doubt it cast over the Catholic priesthood.

But, the pope said, the scandal should make priests grow “in gratitude for God’s gift, a gift concealed in ‘earthen vessels’ which, ever anew, even amid human weakness, makes his love concretely present in this world.”

“Let us look upon all that happened as a summons to purification,” the pope said. He then led the priests in the solemn renewal of their priestly promises to be faithful ministers of Christ, working not for their own interests, but for the good of all men and women.

Father Paul Daly, pastor of St. Joseph Parish in Heywood, England, said, “I think the pope was spot on” in saying the Year for Priests was about thanksgiving and renewal, not shouting the glories of the priesthood.

“It wasn’t a triumphalistic celebration, but was calm and reflective,” he said.

As for the pope using the Mass to apologize for abuse, Father Daly said, “He says and continues to say from the heart that he is shocked and sorry. The pope would have been pilloried if he hadn’t said anything, but he also needed to apologize for the past and renew the church’s commitment to making the church safe for children.”

In his homily, the pope said, “God wants us, as priests in one tiny moment of history, to share his concern about people.”

Called to be shepherds, imitating Christ the Good Shepherd, he said, “we are not fumbling in the dark. God has shown us the way and how to walk aright.”

When priests, like anyone else, walk through “the dark valleys of temptation, discouragement and trial,” they must remember that God is there, he said.

“God personally looks after me, after us, after all mankind. I am not abandoned, adrift in the universe and in a society that leaves me ever more lost and bewildered,” he said.

Continuing the work of the Good Shepherd, the pope said, “the church, too, must use the shepherd’s rod, the rod with which he protects the faith against those who falsify it, against currents which lead the flock astray.”

The “rod and the staff” help the church exercise its love for people and for their true good, he said.

“Today we can see that it has nothing to do with love when conduct unworthy of the priestly life is tolerated,” he said. “Nor does it have to do with love if heresy is allowed to spread and the faith (is) twisted and chipped away, as if it were something that we ourselves had invented,” the pope said.

The Year for Priests coincided with the 150th anniversary of the death of St. John Vianney, the patron saint of parish priests. During the liturgy, Pope Benedict used a chalice that belonged to the saint and was brought to Rome from his former parish in Ars, France.

In his homily, the pope had told the priests that it is impossible for them not to rejoice that God has given them the gift of being able “to set God’s table for men and women, to give them his body and his blood, to offer them the precious gift of his very presence.”

At the end of the Mass, Pope Benedict knelt before an icon of Mary and led the priests in consecrating themselves to her “maternal heart in order to carry out faithfully the father’s will.”

Asking her intervention in calling forth the Holy Spirit to transform them, they prayed that the church would be “renewed by priests who are holy.”

“Let your presence cause new blooms to burst forth in the desert of our loneliness,” they prayed. “Let it cause the sun to shine on our darkness; let it restore calm after the tempest, so that all mankind shall see the salvation of the Lord.”