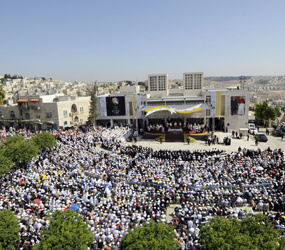 BETHLEHEM, West Bank – Pope Benedict XVI arrived in the Palestinian territories May 13 and immediately declared the Vatican’s support for an independent Palestine.

“The Holy See supports the right of your people to a sovereign Palestinian homeland in the land of your forefathers, secure and at peace with its neighbors, within internationally recognized borders,” the pope told Palestinian President Mahmoud Abbas.

The pope met with Abbas before celebrating Mass in Manger Square outside the Church of the Nativity, which marks the place where Jesus was born.

Pope Benedict stood listening attentively as Abbas spoke about the suffering and daily challenges faced by the Palestinian people under Israeli occupation, including the travel restrictions and what he described as “the apartheid wall” that prevent Palestinian Christians from reaching the Church of the Holy Sepulcher and Palestinian Muslims from reaching al-Aqsa Mosque in Jerusalem.

“On this holy land there are those who continue to build separation walls instead of bridges,” he told the pope, who had entered Bethlehem by crossing through a gate in the security wall Israel has erected along its border and through the West Bank.

“It is time for this suffering to end and to be substituted by love and peace,” Abbas said.

Pope Benedict told the Palestinians that he knows how much they have suffered and continue to suffer “as a result of the turmoil that has afflicted this land for decades.”

He offered his condolences to all those “who mourn the loss of family members and loved ones in the hostilities, particularly the recent conflict in Gaza.”

He prayed that “the serious concerns involving security in Israel and the Palestinian territories will soon be allayed sufficiently to allow greater freedom of movement” so that families can get together and believers can reach the holy sites for prayer.

Making a special appeal to Palestinian youths, the pope said: “Do not allow the loss of life and the destruction that you have witnessed to arouse bitterness or resentment in your hearts. Have the courage to resist any temptation you may feel to resort to acts of violence or terrorism.”

After meeting Abbas at the presidential palace, the pope and president arrived separately for the Mass in Manger Square, which is surrounded by government offices, cafes, restaurants and office buildings.

Photographers and Palestinian sharpshooters were positioned on the roofs. Hanging from the roof of the building facing the papal altar was a huge Palestinian flag.

During his homily, the pope offered special greetings to the small group of Christians from the Gaza Strip who were able to get Israeli permits to travel to the Mass.

Father Jorge Hernandez, pastor of Holy Family Church in Gaza City, told Catholic News Service, “Although it is an injustice, we are grateful that at least one group was able to go out and can see the pope.”

Wadie Abunasser, spokesman for the local church committee organizing the visit, said only 95 permits were issued for Gaza residents.

Father Humam Khzouz, chancellor of the Latin Patriarchate of Jerusalem, said the church had asked for 250 travel permits.

“We should have at least gotten 200,” he added. “There was no explanation for anything.”

The pope said, “My heart goes out to the pilgrims from war-torn Gaza: I ask you to bring back to your families and your communities my warm embrace and my sorrow for the loss, the hardship and the suffering you have had to endure.”

Addressing the pope at the beginning of the Mass, Latin Patriarch Fouad Twal of Jerusalem said that when Pope John Paul II visited in 2000, “we were living in a period of hope. We were hoping for a peace that never came.”

The loss of hope, he said, is the reason why so many Palestinians, particularly Palestinian Christians, have emigrated to other countries.

Noha Stephan, 50, a science teacher at St. Joseph School in Beit Jalla, said it was important that the papal Mass draw the Catholic world’s attention to the situation of Palestinian Catholics because “we need much support to stay in this holy land.”

In his homily, Pope Benedict said Bethlehem is associated with the angels’ proclamation of joy and peace the night Jesus was born, “yet here in our midst how far this magnificent promise seems from being realized.”

The pope asked the Catholics of Bethlehem and all of the Palestinian territories to stand firm like the church over the place of Jesus’ birth.

He told them they must have the courage “to abandon fruitless and sterile ways of thinking, acting and reacting” and instead promote justice and respect for the rights of all.

“Here in Bethlehem, a special perseverance is asked of Christ’s disciples: perseverance in faithful witness to God’s glory revealed here in the birth of his son (and) to the good news of his peace.”

An engaged couple – Peter Rock, 25, and Razan Giacaman, 20 – was among those receiving Communion from the pope during the liturgy.

“It is a special blessing,” said Giacaman, a student at the Catholic-run Bethlehem University. “We are seeing (the pope) together.”

Fadi Barham, 29, has been using a wheelchair since a fall left him paralyzed from the waist down. He, too, was chosen to receive Communion from the pope.

“I dreamed last night about getting Communion and that I walked – ‘inshallah,’“ he said, using the Arabic word for “God willing.”