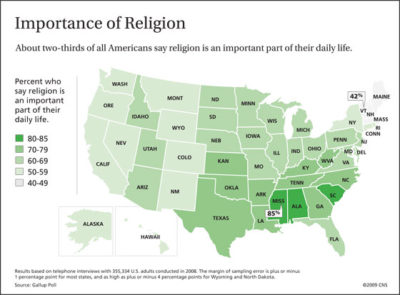 PRINCETON, N.J. – As part of a series titled “State of the States,” a new Gallup Poll ranked the top religious states in the United States and found Southern states ranked highest on the list, while several states in the Northeast ranked the lowest.

After more than 350,000 interviews, the survey found that Southern states had the highest percentage of respondents who said they considered religion to be an important part of their daily lives.

Mississippi topped the list with 85 percent of those surveyed claiming that religion was important. Vermont was named the least religious state, with just 42 percent of respondents there who said they were religious.

The data for the poll was collected throughout 2008 via telephone interviews of 355,334 U.S. residents over the age of 18. According to the Princeton-based polling organization, the poll accounted for varying demographics within each state to ensure the accurate representation of the state’s population.

Overall, Gallup found that the U.S. is generally a religious country. Sixty-five percent of the total population said religion was an important part of their lives.

However, Gallup reported that in surveying countries around the world the median percentage of respondents who saw religion as part of their lives was 82 percent.

After Mississippi, the states with the highest percentage of residents who said religion was important to them were: Alabama (82), South Carolina (80), Tennessee (79), Louisiana and Arkansas (both 78), Georgia (76), North Carolina (76), Oklahoma (75), and Kentucky and Texas (both 74).

Just above Vermont at the bottom of the list was New Hampshire with 46 percent of residents who said religion was important; next came Maine and Massachusetts, both with 48. Other states at the bottom were Alaska (51), Washington (52), Oregon and Rhode Island (both 53), Nevada (54) and Connecticut (55).

In the middle of the list, which included the District of Columbia (61), were Ohio and Iowa, where 65 percent and 64 percent, respectively, of residents put a high importance on religion in their lives. In the Southwest, New Mexico ranked 21st on the list with 65 percent, and Arizona was 34th with 61 percent.

Researchers explained that ethnic and racial distribution could account for the different levels of religiosity across the country, with certain demographic groups in some states having stronger levels of religious affiliation. Each state also has a different culture, which can impact the level of importance residents give religion in their lives, according to the poll.

Regarding other countries, a resounding 100 percent of residents in Egypt reported that religion was important in their lives. On the other end of the spectrum, just 14 percent of the population in Estonia in northern Europe said they were religious.

More information on survey results is available online at www.gallup.com/poll/114022/State-States-Importance-Religion.aspx.